Airbags, including side airbags and curtain airbags, have become synonymous with automobile safety. Automobile manufacturers loudly proclaim the safety of their vehicles using the number of airbags as proof that their products are safe. But according to reports, this year the number of airbag recalls could break a record set just last year, leaving some people wondering if the risk of airbag defects should be a serious concern. 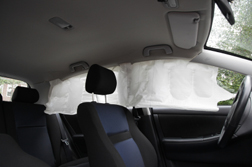 According to a report at AOL Autos (5/1/13), in the six months prior to May 1, the National Highway Traffic Safety Administration had reports of 22 airbag recalls. Since the start of 2013, there have already been 15 airbag-related recalls, more than half the 23 that were announced in 2012.

Included in the recalls were vehicles from 13 automobile manufacturers and seven suppliers. Cars as old as 12 years and as new as the 2013 model year were involved. Meanwhile, Takata, an airbag supplier, has been involved in eight of the recalls announced in the past six months.

But as the AOL article reports, despite the high number of recalls, some automobile manufacturers have taken their time announcing recalls related to airbag failures. This includes one recall that was not announced until seven and a half years after a driver was involved in an accident in which his airbag failed to deploy.

More AIRBAG INJURIES News
There is no doubt that airbags save lives. When they deploy properly, with the correct amount of force in a vehicle impact, they can prevent serious, life-threatening injury to a car’s occupants. The problem is when they do not deploy properly. This can occur in a few ways. In some cases, the airbag does not deploy in an accident or is delayed in going off, putting the vehicle occupant at risk of even more serious injury. In other cases, it deploys when not necessary, such as in a minor collision or with no collision at all. Finally, it might deploy, but with such force that debris from the airbag is sent hurtling into the cabin of the vehicle, putting occupants at risk of serious injury.

For a feature that is designed to increase the safety of a vehicle, and decrease the risk of serious injury, the number of airbag recalls could be concerning.

The most recent recall was announced earlier in May by Chrysler, who recalled 120,000 Jeep Liberty vehicles. According to WHAS (5/13/13), the recall was announced after a defect was found during crash tests carried out by the Insurance Institute for Highway Safety. That defect caused the airbag to deploy more slowly than it was designed to, putting vehicle occupants at risk of more serious injury as their body could be closer than intended to the airbag as it deploys.