A New Jersey jury in July 2012 awarded $9 million each to two plaintiffs who claimed their inflammatory bowel disease (IBD) was directly caused by Accutane. The suit argued that Roche, the maker of Accutane, failed to warn patients of heightened risks for IBD. This is good news for Sandy, who also blames IBD on the acne drug. 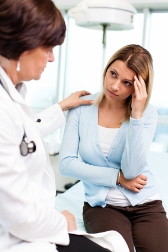 Accutane lawsuits also involve complaints of Accutane Crohns Disease and ulcerative colitis, but Accutane IBD, which can be life-threatening and sometimes involve bowel removal surgery, has had more successful jury verdicts to date.

Last year Sandy was diagnosed with IBD and ulcerative colitis, but she had suffered from Accutane side effects for about five years. “I took Accutane for only six months in early 2004 and I wish I could just turn back the clock—it is unbelievable how much this drug has messed up my life,” she says.

Sandy suffered in silence for many years because she didn’t have health insurance until last year. “I was finally able to see a doctor and had extensive testing done, including a colonoscopy, to determine the cause of my symptoms,” she explains. “I have constant stomach pain, back pain, bloating and cramping. I have to be extremely careful of what I eat and rarely dine out—it is just too frustrating and embarrassing. I'm always in and out of the bathroom, which is also very time-consuming when I'm at work. Since my diagnosis I've had follow ups with my gynecologist as well as my primary care doctor to ensure there we no other reasons or causes of my pain, and there are none. I asked my doctor (he didn’t prescribe Accutane) if this drug could have caused IBD. He said it was more than likely.”

Like Sandy, Kathy blames her IBD—and more--on Accutane. She took the drug twice back in 1997 and remembers that year as the last time she was happy. “Fortunately I am now in therapy for depression but not before three suicide attempts and countless hospital stays,” Kathy says. “I developed an eating disorder around 2000 and after that came IBD. Not once did I attribute the decreasing quality of life I was enduring to Accutane, I just never made the correlation.”

More ACCUTANE IBD News
Kathy finally connected the dots when she saw a TV advertisement linking Accutane to an increased risk of psychological changes, including depression and suicidal behavior. “I have extensive medical records documenting all of these Accutane side effects and my parents spent so much money, and thankfully so, or else I wouldn't be here today. I would like to join a lawsuit and attempt to pay them back.”

Accutane was pulled from the market in June 2009 after a court decision awarded more than $33 million in damages to be paid by Roche to victims of Accutane injuries. Before that order, Roche was required to pay damages in several other cases, including $13 million in November 2008 and $10.5 million in April 2007. Roche said that the high cost of lawsuits—it was facing more than 5,000 product liability claims-- was the main factor in discontinuing Accutane, both in the US and 11 other international markets.

The next status conference for Accutane cases in the New Jersey MCL (no. 271) has been scheduled for December 6, 2012.

Posted by
Angela Blumhoefer
on August 20, 2015
Looking for a lawsuit from accutane causing degeneration in disks and slipped disks in back