When Brandon was 17 he was prescribed Accutane for a mild case of acne. Although Accutane was approved (it was taken off the market in 2009) to treat severe, disfiguring acne, the benefits far outweighed the risks, particularly in Brandon's case. He likely would have outgrown the acne stage without any scars; instead he wound up with Crohn's disease. 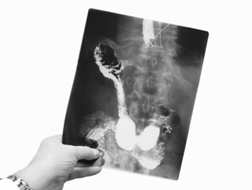 "My doctor told me that Accutane was the cure and as a teenager that's what I wanted to hear," says Brandon. "I didn't pay any attention to the side effects; I constantly had bloody noses and my skin was thin and brittle. I remember during a basketball game, somebody smacked me across the face and my skin literally peeled away…

"I matured and the acne went away, but after taking Accutane for about four years, I began to get stomach problems. Being a typical 20-something male, I just dealt with it and didn't see a doctor."

But Brandon did have to deal with it when he was rushed to the ER. "I was playing basketball again and the side of my stomach started hurting," he explains. "I went to bed that night but woke to the worst pain in my life." At the hospital, doctors suspected Brandon's appendix had burst. He had a CAT Scan and just minutes before surgery, a forward-thinking surgeon said it could be a number of problems, including Crohn's disease. Brandon still has his appendix intact.

"To make a long story short, I stayed in the hospital for five days and had a battery of tests, including a colonoscopy," says Brandon, who was eventually diagnosed with Crohn's disease. Since that time, he has undergone major surgery to have parts of his small intestine removed. "I have to take Remicade to fight this disease, but that has its own side effects, such as fatigue," Brandon says. "It also lowers your immune system and now I get the flu and colds just about every other month."

It once was thought that anxiety and diet caused Crohn's disease. These days researchers are focused more on an abnormal inflammatory response of the body's immune system to bacteria in the intestines. Studies are also being conducted on finding a hereditary link to the disease. Brandon says there is no history of any intestinal conditions in his family.

"When I was diagnosed with Crohn's I asked my doctor how I could have developed this disease," says Brandon. "He just directed me to websites and referred me to a nutritionist. I can't remember if my mom or the nutritionist mentioned Accutane. Then I Googled the acne med and was shocked to see the connection with Crohn's disease and many other serious side effects.

More ACCUTANE IBD News
"And I was frustrated, but there is no point in being pissed off because I can't do much about it except file a lawsuit. I'm still active but have to put Crohn's in the forefront of my brain when I do anything. As for my diet, there isn't an hour in the day where I don't monitor myself; I have to be really careful and now I am back on the most severest medication, which gives me nasty side effects.

"I am getting involved in a lawsuit because I would like to recover the costs of surgery and the cost of Remicade, which is about $6,000 every two months. Luckily my employer has kicked in so I only have to pay $500 for each prescription. I am not looking at making money or retiring. I would just like some help with medical bills."

A Florida jury awarded a victim of Accutane $7 million who was diagnosed with Crohn's disease in 2000, and a woman in Utah was awarded $10.5 million in her Accutane lawsuit.