In the wake of recent research, more lawsuits are being filed against Monsanto claiming its weedkiller Roundup causes cancer. And California’s Office of Environmental Health Hazard Assessment (OEHHA) has likely added one more nail to Roundup’s coffin. 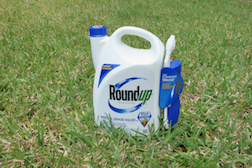 After the World Health Organization’s International Agency for Research on Cancer (IARC) last March announced the pesticide is “probably carcinogenic to humans” and that a “positive association has been observed for non-Hodgkin lymphoma”, the OEHHA followed. It added glyphosate to the state of California’s list of chemicals known to cause cancer. This decision is good news for the 37 lawsuits consolidated last November in Northern California where the first Monsanto cancer lawsuits were filed. One of which is a wrongful death lawsuit filed last March.

California attorneys filed the wrongful death suit against Monsanto on behalf of Teri McCall, whose husband Anthony was diagnosed with an aggressive form of non-Hodgkin lymphoma. On December 26, 2015, he passed away. Three years previously, the family dog also developed lymphoma and died at age six—he played in the fields Mr. McCall had sprayed with Roundup.

(Ironically, false advertising lawsuits include Monsanto proclaiming in an advertisement that “Roundup can be used where kids and pets will play and breaks down into natural material.” It depicts a person with his head in the ground and a pet dog standing in an area that has been treated with Roundup.)

The McCalls’ operated a farm in Cambria, California for over 40 years. Mr. McCall only used the herbicide Roundup, believing Monsanto’s claim that it was safe. Monsanto went so far as to claim Roundup is “safe as table salt”. But lawsuits state that Monsanto knew for decades that glyphosate, the active chemical in Roundup, is a carcinogen. And Monsanto allegedly knew before glyphosate was first approved by the EPA that the chemical includes a cancer risk.

Monsanto Cancer Evidence
The rest of the US needs to get on the same page as California, France, The Netherlands, Sweden and Italy, all of which have raised concerns about Roundup and are debating whether to relicense the herbicide. Based on the IARC findings, the French Minister of Ecology has called for a ban on glyphosate herbicides across the EU, according to The Guardian.

In March 2015 a summary of a study involving five agricultural chemicals in a class known as organophosphates was published in The Lancet Oncology. It rated glyphosate as “probably carcinogenic to humans”, and labelled it category 2A.

"The risk of cancer may be present for individuals ranging from those who simply use the product in the yards or gardens to individuals who work in landscaping or on farms,” said Alan Christopher of Consumer Safety Watch, a consumer advocate organization.

Roundup accounted for almost $2.8 billion in sales in 2000, and outsold other herbicides by a margin of five to one. At that time, the herbicide was responsible for almost 50 percent of Monsanto’s revenue and to this day glyphosate remains one of the world’s largest herbicides by sales volume.

If you have been exposed to Roundup, consider seeking legal help. As of last August, Monsanto said it faces over 200 lawsuits after its motions for dismissal were denied in some cases.
READ ABOUT MONSANTO ROUNDUP LAWSUITS

Posted by
Michelle Sanchez
on January 18, 2017
My Father worked for this company and us kids were always exposed to the chemical, I did get non Hodgkin lymphoma cancer stage 4 I'm in remission but afraid of cancer coming back, just wanted to know if I am able to get legal help
Posted by
T. MATTHEW PHILLIPS
on January 7, 2017
How come ZEN HONEYCUTT never sues Monsanto?
Posted by
Liberty
on January 5, 2017
To all of you chem heads, and poisoners of the planet, we'll be happy to put you on an island with all the chemicals that you just LOOOOOVE, and let you poison yourselves. We'll call it a double blind study. The other island will consist of only Organic farming population. We will then record the DNA changes and record the rise (or not) in the rates of cancer and related diseases such as autoimmune.
You name the date, and offer yourselves up as guinea pigs.
Drink the RoundUp!!!

based on UN:
The pesticides now being considered for inclusion on the Convention's PIC list are: binapacryl; DNOC and its salts; ethylene dichloride; ethylene oxide; monocrotophos; parathion; toxaphene and dustable powder formulations containing a combination of benomyl at or above 7 per cent, carbofuran at or above 10 per cent and thiram at or above 15 per cent.
2,4,5-T, aldrin, captafol, chlordane, chlordimeform, chlorobenzilate, DDT, 1,2-dibromoethane (EDB), dieldrin, dinoseb, fluoroacetamide, HCH, heptachlor, hexachlorobenzene, lindane, mercury compounds, and pentachlorophenol, plus certain formulations of methamidophos, methyl-parathion, monocrotophos, parathion, and phosphamidon.

Posted by
Tont Davies
on January 3, 2017
I am surprised, but maybe not, about your ability to screw up the details.

The WHO has 4 parts that opined on glyphosate and 3 said it is not a carcinogen but 1 put it into the same hazard group as eating processed meats ! They spent 4 hours reviewing its safety. The same WHO group has opined on about 100 items and only one was not a cancer threat - that was yoga pants. The German agency spent 4 years and concluded it was safe as well as many others.

Despite glyphosate being a hated "pesticide" it is very safe and better than many others and there is zero evidence it causes cancer in humans. The only people money of this are lawyers ------oh that's why you twist the facts. Now it all makes sense