The latest news regarding Roundup and its link to cancer doesn’t look good for Monsanto or the Environmental Protection Agency (EPA). Jess Rowland, the former Deputy Director of the EPA, may have played a major role in a cover-up to hide evidence of the possible cancer-causing glyphosate in Monsanto`s Roundup. 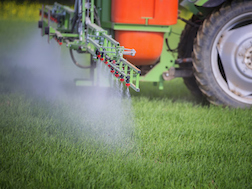 Rowland has been named in dozens of lawsuits filed against Monsanto and its Roundup weed killer. And a February 10 court filing claims that the EPA has actually tried to protect Monsanto`s interests and “unfairly aid the agrichemical industry,” according to EcoWatch(Feb. 14, 2017).

The filing (MDL No. 2742, Case No. 16-md-02741-VC) refers to Rowland as a private citizen who formerly served as Monsanto’s chief “friend” within the EPA. It says he “left EPA mysteriously within days of an “inadvertent” leak and subsequent retraction of an EPA draft report on the safety of glyphosate, that bore Mr. Rowland’s signature.”

Rowland, who chaired the agency’s Cancer Assessment Review Committee (CARC), resigned from his position a few days after the CARC report was posted and then taken off the EPA website on May 2. The report, which stated that glyphosate was “not likely to be carcinogenic”, was based on an EPA cancer assessment for glyphosate that Rowland had been responsible for overseeing. But the report had been leaked to the media before it was removed from the agency’s website.

U.S. District Judge Vince Chhabria is presiding over the case. He agrees that the evidence demonstrates a “highly suspicious” relationship between Rowland and Monsanto, and said, “When you consider the relevance of the EPA’s reports, and you consider their relevance to this litigation, it seems appropriate to take Jess Rowland’s deposition.”

More MONSANTO ROUNDUP News
And the plot thickens. There is also a letter dated March 2013 from the EPA’s toxicologist Marion Copley, who died less than a year later—ironically from cancer. She said that glyphosate should be classified as a “probable carcinogen,” and listed numerous health-endangering effects of the chemical. Copley accused Rowland of playing “conniving political games,” intimidating staff members and altering reports so as to “favor industry.” Copley also indicated that Anna B. Lowit, director of the EPA’s Office of Pesticide Programs at the time, was taking bribes. Copley’s dying request was that Mr. Rowland “for once do the right thing and don’t make decisions based on how it affects your bonus. You and Anna Lowit intimidated staff on CARC and changed HIARC and HASPOC final reports to favor industry.”

In the filing, Copley said, “I have cancer and I don’t want these serious issues in HED to go un-addressed before I go to my grave. I have done my duty.”

Posted by
Ralph A. Applegate
on April 7, 2018
But , actual cause of Roundup, not glyphosate , is that Roundup causes Immunoglobulin M (IgM) to increase much more above 30-306mg/dl , in my case 2-18-CV-00045-JLG-EPD, Ohio , my IgM increased to 8980 mg/dl . Judge Graham has relevant evidence . I have more evidence from Dr. Romeo Mandanus , but , he refuses to testify anywhere. If you have Pacer, I do not, yet , you can get copy of my case for 10 cents per page .Send to leahdeb@aol.com