A study published this November in the Annals of Rheumatic Diseases by the Jefferson Institute of Molecular Medicine of Thomas Jefferson University has shed light on some of the mechanisms by which a common MRI contrast agent affects the body, according to a Jefferson Hospital press release. 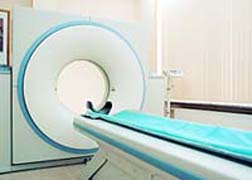 The study examined collagen-producing cells from tissues affected by nephrogenic systemic fibrosis (NSF), a disease that entails thickening of the skin and development of scar tissue that has been linked to gadolinium, an element used in MRI contrast agents.

More MRI HEALTH RISK News
The first study found that cells affected by NSF produced an increased amount of collagen and also contained smooth muscle actin, a protein found in smooth (involuntary) muscle. These changes persisted through multiple generations of cell division, indicating that the changes were likely imprinted on the cell's genetic material, according to the press release.

Dr. Sergio A. Jimenez, professor of dermatology and cutaneous biology at Jefferson Medical College and co-director of the Jefferson Institute of Molecular Medicine, explained that "normal people excrete gadolinium-containing contrast agents rapidly, but the chemical can stay in the body for prolonged periods in people with renal disease... [causing] potentially fatal side effects."
READ ABOUT MRI HEALTH RISK LAWSUITS