General Electric has been accused of failing to adequately inform Danish regulators about a patient who died after being exposed to MRI contrast dye. This finding came from the Danish Medicines Agency and was reported by ProPublica on 6/17/10. 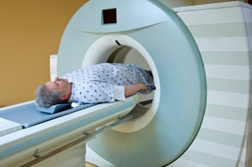 According to ProPublica, the victim, Birthe Madsen, was given Omniscan for an MRI in 2002. She is thought to be one of the first patients to have developed what is now called nephrogenic systemic fibrosis (NSF), a condition linked to the use of gadolinium-based contrast agents. Since Madsen died, other patients have become ill and diagnosed with NSF. Madsen died of a lung embolism in 2003.

In 2004, a government insurance agency found that Omniscan was responsible for Madsen's condition and her death. GE Healthcare was reportedly notified of the decision but did not immediately report the incident to the Danish Medicines Agency.

GE will not face any further action related to the incident because the statute of limitations has expired. GE claims that it reported as required and denies that Omniscan causes NSF.

More MRI HEALTH RISK News
Critics argue that if GE had given more information to government officials, medicine agencies could have acted more quickly and possibly prevented more cases of NSF from developing.

Gadolinium-based dyes now carry a warning about the risk of NSF on their labels. On May 23, 2007, the US Food and Drug Agency (FDA) announced that it asked manufacturers of gadolinium-based contrast agents to include a warning for patients with kidney insufficiency that they were at a risk of developing NSF. Furthermore, the warning states that patients with chronic liver disease, and those who had or are about to have liver transplantation, are at risk for developing NSF if they experience even mild kidney insufficiency.

NSF is an irreversible condition characterized by the hardening of the skin around the joints. As the disease progresses, patients may become immobile. The tissue around the patient's organs can also harden, resulting in death.
READ ABOUT MRI HEALTH RISK LAWSUITS