A medical whistleblower based in Denmark who recently settled a lawsuit with GE Healthcare, manufacturer of the MRI contrast agent Omniscan, told the Sunday Times of London that he has seen a "medical hurricane" of cases involving kidney failure. 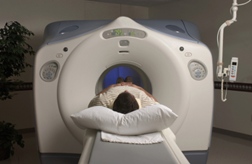 MRI contrast agents pose very little risk to individuals with healthy kidneys. The gadolinium-based contrasting agents are toxic, but are not considered a threat so long as the kidneys can excrete the offensive agent in a reasonably efficient manner. The problem arises when patients have pre-existing kidney problems, which frequently slow or prevent the expulsion of gadolinium from the body.

That's what happened to Margaret Roxburgh of Glasgow. According to a recent account in the Sunday Times of London, Roxburgh went in for a routine MRI procedure in September 2006, unaware that her inherited kidney disease would leave her with nephrogenic systemic fibrosis (NSF), a rare condition with no known cure.

Roxburgh started experiencing "horrendous pain" a day after undergoing the MRI. A doctor advised her not to worry, that she was probably suffering from a temporary reaction to the procedure.

More MRI HEALTH RISK News
Today the 54-year-old grandmother can't bear to have anything covering her legs or feet. The skin on her legs is raw and her feet are swollen and bent at odd angles. "I've totally lost my independence," she told the Sunday Times. "Before this happened I was never in the house. Now I'm never out of it. This has ruined my life."

According to the Times, the first red flag went up two years before Roxburgh's scan, when woman in Denmark died in 2004 from the effects of NSF. Two years later, Henrik Thomsen, a Danish academic, noted that all the patients in his hospital at Copenhagen who had been diagnosed with NSF had been administered Omniscan, an MRI contrasting agent made by GE Healthcare.

Regulators later joined the manufacturer in warning about the risks posed by Omniscan and other gadolinium-based contrasting agents. Last year doctors were advised to test their patients for renal function prior to administering the drug.
READ ABOUT MRI HEALTH RISK LAWSUITS