A new study suggests that the risk of MRI contrast side effects is as much as 77 times higher for patients undergoing dialysis. Furthermore, patients who have had a kidney transplant are 69 times more likely to develop Nephrogenic Systemic Fibrosis (NSF), a side effect of the MRI contrast agent. The combination of gadolinium and dialysis could potentially be fatal for some patients. 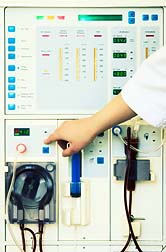 Researchers concluded that the study "demonstrates a 77-fold higher risk of NSF among patients who undergo hemodialysis and a 69-fold higher risk in patients with renal transplantation. This increased risk is thought to be associated with poor clearance of most GBCAs."

Patients with NSF experience a thickening of the skin around their joints, which makes movement increasingly difficult. Excessive scar tissue also forms around the tissue surrounding internal organs. This can eventually be fatal, as the organs are unable to function properly. Nephrogenic Systemic Fibrosis is a very painful and debilitating disorder.

Gadolinium-based contrast agents now carry a black box warning alerting patients to the risk of NSF (also known as nephrogenic fibrosing dermopathy). An FDA advisory committee will meet on December 8, 2009 to examine the warnings associated with gadolinium-based contrast agents. The committee will determine whether some agents should be contra-indicated for patients with kidney problems.
READ ABOUT MRI HEALTH RISK LAWSUITS