The FDA issued a press release on May 23, 2007, to announce that the agency was asking manufacturers to include a new black box warning on the labeling of all gadolinium-based contrast agents used to enhance the quality of magnetic resonance imaging (MRI).

The warning states that patients with severe kidney insufficiency who receive the agents are at risk for developing a debilitating and potentially fatal disease known as known as Nephrogenic Systemic Fibrosis or Nephrogenic Fibrosing Dermopathy (NSF/NFD).

In addition, the FDA warns that patients receiving the agents just before or just after liver transplantation, or patients with chronic liver disease, are also at risk for NSF if they are experiencing kidney insufficiency of any severity. 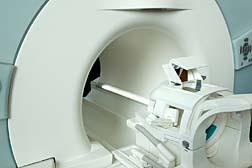 This NSF warning will likely shine a brighter spotlight on the MRI for profit scheme revealed on January 17, 2007, when Illinois Attorney General Lisa Madigan announced that her office had intervened in a whistleblower lawsuit filed by John Donaldson in 2006 against more than 10 Chicago-area MRI centers over their payment of kickbacks to doctors in exchange for referring patients to the centers.

According to the complaint, "Each participating MRI Service Center involved performs the subject MRI services and then engages in the making of illegal and unlawful kickbacks to the physicians from payments made by both Illinois citizen patients and their insurers."

The schemes, the lawsuit alleges, make it impossible for legitimate providers to engage in legitimate practice of providing MRI services and remain in business if the scheme and unlawful practice of paying kickbacks for patients is not stopped.

According to Mr Donaldson, he has experienced a substantial drop in physician referrals over the past 24 month as more doctors referred patients to centers involved in the kickback scheme. In the complaint, he says, physicians have advised him that they would prefer to utilize his services, but only if his "business would pay kickback payments to physicians for referring MRI patients."

Physicians were told the referrals could earn an annual revenue of $84,900 to $132,900, assuming the doctor had a referral rate of 40 scans per month, according to the May 10, 2007, Chicago Tribune, and although there are only 11 companies named in the complaint, the attorney general's office thinks the scheme stretches across the country.

The FDA first notified the public and health care professionals about the MRI-related risks for NSF in June 2006 and updated the information in December. As of December 21, 2006, the FDA said it had received reports of 90 patients with moderate to end-stage kidney disease who developed NSF/NFD after they had an MRI or MRA with a gadolinium-based agent.

MRA is a special type of MRI used to study blood vessels to help in the detection of heart disorders, stroke and vascular diseases. The gadolinium-based agents are not FDA approved for MRA, but the FDA says, some radiologists believe that these agents help provide detailed images of blood vessels.

According to Doctors Guide on January 25, 2007, approximately 400 cases of NSF have been reported worldwide. "While gadolinium-based agents have not been definitively shown to cause NSF," the article says, "as many as 90 percent of known NSF patients had previously received gadodiamide, and a recent survey of approximately 100 NSF patients revealed that more than 95 percent were exposed to a gadolinium agent within two to three months prior to disease onset."

"Other evidence linking gadolinium with NSF," Doctors said, "includes residual gadolinium in a skin biopsy of an NSF patient 11 months after the contrast agent was administered."

Bayer Schering Pharma manufactures Magnevist; GE Healthcare is the maker of Omniscan; OptiMARK is manufactured by Mallinckrodt, Inc; and ProHance and MultiHance are made by Bracco Diagnostics Inc.

According to the EMEA (European Agency for the Evaluation of Medicinal Products), NSF develops over a period of days to several weeks. "The first symptoms are red or dark patches or papules that develop on the skin," the EMEA states. "The skin of the limbs, and sometimes the trunk, thickens and feels 'woody'."

The skin surface can resemble an orange-peel texture, the EMEA says. "Patients may experience burning, itching, or severe sharp pains in the affected areas, and hands and feet might swell with blister-like lesions."

"In many cases," the agency notes, "skin thickening prevents joint movements and might result in contractures (an inability to straighten the joints) and immobility."

Other organs that might be affected, include the lungs, liver, muscles and heart, and about 5% of patients have very rapid and progressive development, and some patients may die.

The FDA reports that, "there is no consistently effective treatment of this condition."
Since NSF was first recognized in 1997, researchers had come up with several theories about the cause, but it was not until early 2006 that an association with gadolinium-based agents was made after a study found that several patients with end-stage renal failure developed NSF, 2 to 4 weeks after having an MRI.

Experts say neonates and infants up to 1 year of age may also be at risk because their kidneys are not fully developed.

The UK Commission on Human Medicines (CHM) and one of its expert advisory groups reviewed the NSF issue in January 2007 and proposed a step-wise approach to restricting the use of the agents in patients with kidney disease, in liver-transplant patients and in neonates.

On the basis of the available evidence, the committee concluded, the balance of risks and benefits of gadodiamide in patients with severe kidney failure was negative, and that gadodiamide should not be used in these patients or in those who have had, or who are waiting for, a liver transplantation.

NSF also has developed after the sequential administration of Omniscan and MultiHance and Omniscan and ProHance. Because reports incompletely describe exposure to gadolinium-based contrast agents, the FDA says, it is not possible to know if the extent of risks for developing NSF is the same for all agents.

The agency says all patients should be screened for kidney problems prior to receiving one of these agents, the recommended dose should not be exceeded, and before the agent is used again, enough time should elapse to ensure that a dose has been eliminated from the body.
READ ABOUT THIS LAWSUIT

If you or a loved one has suffered health problems as a result of an MRI or MRA, please contact an [MRI Kidney Failure Lawyer] who will review your case at no cost or obligation.
Request Legal Help Now