Tales from the Dark Side of Debt Collection

More Americans than ever have debts they can’t pay because they lost a job or got sick, or their finances got out of hand for some reason. But as attorney Ben Dupre explains, it doesn’t mean that they need to be further victimized by the illegal tactics of unscrupulous debt collectors that try to harass people into paying up rather than take the lawful but more costly and time-consuming route through the courts. 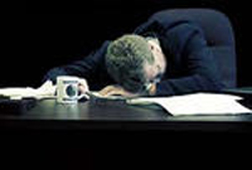 “The law says clearly you are not allowed to engage in telephone calls with a frequency that would show intent to annoy or harass a consumer,” says Dupre.

Despite that, debt collection companies will often engage in a telephone campaign. “The calls can range from 5 to 12 calls a day, 7 days a week, from morning to night. They use auto dialers and the calls just don’t stop,” he adds.

“I had one client who had 4,000 calls from a bank debt collector over the span of a year,” says Dupre. “The debt collector was trying to hide their illegal tactics and it took a court order to get the bank to produce the phone records and admit what they’d done.”

To make the calls stop, people borrow from family and friends or file for bankruptcy, when in fact, there are much better options if only the debt collectors would do what the law says they have to do and offer detailed payment options or take them to court.

The law says that debt collectors are obligated to tell debtors that they can write a letter and tell the creditor to cease and desist from further calls. But a frequent tactic of the debt collector is to talk so fast that they the debtor can’t understand what they’re saying.

Debt collectors have also become very social media savvy. They often track people on Facebook or Twitter and start sending messages to them or their friends, family, or even neighbors. “I had one client who was estranged from their family. The debt collector began contacting relatives that my client hadn’t spoken to in years. Now, in addition to the debt collector hounding them, they were getting a violent reaction and threats from the estranged family members!” says Dupre.

“There are really strong consumer protection statutes, but unfortunately, not all consumers know their rights,” says Dupre. “They feel this moral sense of obligation to pay and they think that the creditor has this moral right to inflict this kind of abuse on them. They just don’t know that there’s a line the debt collector can’t cross and they have just crossed it.”

Being harassed by debt collectors can be a life-altering experience that people never forgot even after they have disposed the debt. “These are people who are at one of the lowest points in their lives. It’s a place they never imagined they’d be. This is an event that they will never forget for the rest of their lives. They will be able to tell you date and time of when the calls occurred and the impact it has on them physically and psychologically,” says Dupre.

Dupre has been very successful over the last several years representing individuals who have been the target of illegal debt collection practices. They come into his office usually just looking for a way to get the phone calls stopped and are often pleasantly surprised to find out they can actual win financial damages. “They don’t look at it as a way to get money,” says Dupre. “They just want the conduct to stop. When I get an end to the calls and I am able to win damages, it’s usually a big surprise.”

This kind of litigation against debt collection agencies can take time warns Dupre. But when they actually get to court and his client starts to tell the litany of harassment they have been subjected to, the courts listen.

More BILL COLLECTOR News
“Their stories are often very powerful and moving and jurors get it,” says Dupre. “They often award significant damages to my clients. You don’t have to be hospitalized or have doctors’ reports. It’s usually enough for clients to talk about the endless arguments about debts and bills you can’t pay in front of your children at the dinner table and while the phone rings endlessly. Juries get that.”

Dupre has won significant amounts for many of his debt collector victim clients, including a substantial amount for that client who had 4,000 calls in one year from a debt collection agency. “It shouldn’t take a lawyer to see that these people’s rights are respected. Unfortunately, it seems to,” he says.

Posted by
Fred Nordhorn
on December 15, 2013
All my debt problems is medical. (Like i wanted to rack up the debt in the first place)
I have 2 classes of Debt
Before Sept. 2010 all these Debts should be paid by the VA (Veterans Admin)
and the one from Sept. 2010 on where medicare left me with something to pay.

Posted by
Stephanie
on December 14, 2013
This is for NANCY-and her post ABOVE. Well, Nancy you obviously have never had any financial hardship, unemployment, or your lover run off with a meth head and leave you with 2 homes to pay for!!!!!! Oh and Iet's not forget our friends Ch.7 & Ch.13, Nancy! Oh....and MOST IMPORTANTLY you obviously never had a surgeon....opps cut the wrong thing and spend the next 4 - $#@! YEARS, SURGERY AFTER SURGERY AFTER SURGERY trying to get you health & body back, Nancy! Oh and then to, of course, no job during all these surgeries and then left with nothing but MEDICAL BILLS & COLLECTORS calling all day - forcing you into yet ANOTHER bankruptcy and the icing on the cake. ....no grounds to sue the surgeon & Disability income is ALL YOU CAN ACHIEVE!
When you've been through a life changing experience - it's then you'll understand what this article was about. Otherwise go back to your country club and drown in your expensive Scotch & I hope you at the very least are a victim of identify theft.....
Posted by
Nancy
on December 10, 2013
Sorry, Bill, but I see Don's point. People shouldn't buy things they can't afford to pay for. Most of them ignore the calls but then complain that they're getting them. If they would just talk to the collection agency, they can work something out. There are so many lawyers out there who will sue any collection agency, or retailer for that matter, because they just want to make a buck. Often there's no violation of the FDCPA at all, but these attorneys know that it's more costly for a debt collection company or retailer to settle than to go to court -- and they count on that happening so they can get a fee for no reason at all. All these companies want you to do is pay your bills, and it's getting to the point where people don't have to pay for anything any more; all they have to do is send a "cease and desist" letter, hire an attorney, and they can ignore the bills.

If you think this is good for our economy, you're wrong. Loan and credit card companies will simply enact more stringent rules about who gets credit and who doesn't, and the middle and lower classes are completely screwed. Credit will only go to the wealthy, who don't need it anyway.

Posted by
Don
on December 8, 2013
or make payment arrangements and stick to them, don't rack up debt in the first place. I own(ed) a business that went under because people couldn't pay thier bills, one client took over 14 months to settle on a 15k debt they owed me.
if you can't afford it, don't buy it, don't screw someone else over because you want something you can't pay for.

my credit rating has suffered because clients can't pay.

Bill cotter- it's not extortion, it's wanting someone to pay their debt. if the person doesn't owe a debt- that's different, if the person owes it- PAY UP

Posted by
Bill Cotter Sr
on December 3, 2013
That's plain extortion. Either the debt collector can prove this debt,in a court of law, or stop calling. To call and call until they get the consumer to pay has to be illegal. People that rob banks, steal from stores even those put on a sex offender list are treated better than anyone getting calls from a debt collector. The law NEEDS to change.