Were you looking for Hip & Knee Replacement lawsuits?

Smith & Nephew, a global medical technology company based in England, is facing lawsuits over some of its Birmingham Hip Replacement (BHR) and R3 metal-on-metal hip replacement systems. The lawsuits concern the alleged premature failure of Smith & Nephew's metal-on-metal hip implant devices, which can cause pain, limited mobility and the need for revision surgery and replacement.

Send your Smith & Nephew Hip Implant claim to a lawyer who will review your claim at NO COST or obligation.
GET LEGAL HELP NOW 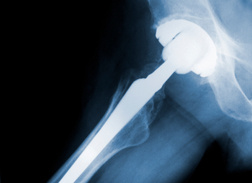 Hip replacement devices are generally expected to last between 10 and 20 years. However, some newer-generation hip replacement devices have a higher failure rate, often due to metal-on-metal components. When metal-on-metal hip implant components rub together, the parts can release microscopic metal particles into the bloodstream, potentially causing a form of metal poisoning called "metallosis".

Smith & Nephew has issued recalls on certain of its hip replacement implant systems due to high numbers of complaints about premature failure of certain models of its hip systems and the devices' metal-on-metal parts causing metal particles to release into the bloodstream and tissue.

On November 15, 2016 Smith & Nephew initiated a voluntary recall of its Modular Neck Hip Prostheses of the Modular SMF and Modular REDAPT Revision Femoral Hip Systems and associated stems for the devices.

According to the letter: "Smith & Nephew considers that patients implanted with the modular neck hip prostheses may be at greater risk of revision surgery than with comparable monolithic products."

On April 5, 2017, the JPML in response issued an order transferring numerous lawsuits to the Maryland MDL but renamed the MDL Re: Smith & Nephew Birmingham Hip Resurfacing (BHR) Hip Implant Products Liability Litigation because only cases that concern the BHR system (and not the R3) will be transferred to the MDL.

In January 2017, Linda Taylor of Texas, who received a Smith & Nephew Birmingham hip in 2007, filed a lawsuit Taylor et al v. Smith & Nephew, Case No. 2:17-cv-00038, US District Court for the Southern District of Texas for premature failure of her BHR hip implant. Taylor claimed in her lawsuit that she had a Smith & Nephew Birmingham hip implanted in 2007 but the device failed prematurely and she developed metallosis and had to undergo revision surgery. The lawsuit also alleged that Smith & Nephew failed to meet post-marketing surveillance and reporting requirements designed to make sure that the hip replacement system was safe and effective.

According to the annual report, the Smith & Nephew group has estimated for 2017 a provision of $163 million relating to estimated costs to resolve "all other known and anticipated metal-on-metal hip claims."

If you or a loved one has suffered similar damages or injuries, please fill in our form and your complaint will be sent to a lawyer who may evaluate your claim at no cost or obligation.
Please click here for a free evaluation of your Smith & Nephew Hip Implant claim
Last updated on Jun-20-17

Posted by
SulestineAtkinson
on March 17, 2020
I had a hip replaced in2008 the hip keep dislocating, then in 2012 i had that hip replaced with another hip. the first was a Stryker hip the second was a Zimmer hip, the Zimmer, hip had to be removed in 2016 , and replaced with a ceramic hip, the Zimmer hip was metal on metal , which i received poison in my blood stream , from the shavings off the hip i almost died, there was Colbolt and Chronium in my blood stream i wound up with Metallosis serval lawyers would not take my case, never told me why, just told me i could get another lawyer if i wanted to i know the expiration for the hip had expired.i still have the pain and can't hardly walk , but never received no recognition , from any one ,it isn't right for me to suffer without any,compensation at all. SINCERELY SULESTINE ATKINSON
Posted by
Thompson
on January 23, 2020
Failed knee dislocation 2016 fitted
Cemented 2016 S&N
Comments via email only please