Were you looking for Data Breach lawsuits?

More and more companies face lawsuits alleging their actions or negligence have compromised people's privacy. This privacy invasion can occur through internet data breaches, misuse of targeted advertising, or illegal monitoring of private communications. Even when purchases are made in person, there is a possibility of a breach of privacy if the retailer illegally collects customer zip codes or other identifying information. There are laws designed to protect consumers from illegal privacy breaches, but consumers may have to file lawsuits to ensure their rights are protected.

Send your Privacy Violation claim to a lawyer who will review your claim at NO COST or obligation.
GET LEGAL HELP NOW

Invasion of privacy is the illegal sharing, intrusion, misappropriation, or exploitation of a person's private affairs when those affairs have no relevance to the public. In some cases, what would be considered an invasion of privacy in a private citizen may not be when applied to a politician or other public figure.

There are four main categories of invasion of privacy claims (although these vary depending on individual state laws): 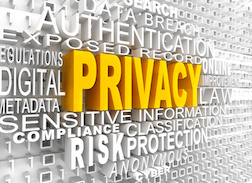 There are laws designed to protect the privacy of individuals, although these laws are evolving as the use of the Internet and the collection of consumers' personal information becomes more widespread.

The Electronic Communications Privacy Act (1986; ECPA)—Prevents the government and other third parties from accessing or sharing communications without proper authorization. The act protects communications that are stored as well as those that are in transit.

Each of the states has its own laws concerning invasion of privacy, with differing levels of severity. For example, California has the California Invasion of Privacy Act, which is considered one of the more restrictive state privacy laws because it requires all parties give consent before certain communications can be recorded. Not all states have the same requirements for privacy protection.

Various companies face lawsuits alleging they left private consumer information vulnerable to hackers by failing to properly ensure personal information was stored safely. In such cases names addresses, medical information and even financial information have been accessed by unauthorized third parties who commit data breaches. These include Target, Home Depot, and Wendy's.

Snapchat In 2016, a lawsuit seeking class action status was filed against Snapchat, alleging users' biometric information was stored and used without informed consent. The lawsuit, filed by Jose Luis Martinez and Malcolm Neal, claims their biometric information was compromised, which puts them at risk of identity theft and is a violation of the Illinois Biometric Information Privacy Act.

Yahoo In 2013, a lawsuit was filed against Yahoo, alleging the company's monitoring of emails involving people who did not have a Yahoo account for targeted advertising purposes violated the California Invasion of Privacy Act. In 2016, that lawsuit was settled, with Yahoo agreeing to scan emails only while they are at rest on servers, rather than when the email is in transit.

San Francisco, CA: If you are one of the 1.4 billion Gmail users around the globe, you are likely more than familiar with annoying online ads. But so too are email users who didn’t sign up to Gmail. People like Rick, who is fed up with barrages of ads. And people like Rick are filing Google complaints.READ MORE
Google Mail California Claims Expire end of September: File Now, Attorney Urges

Attorney Ray Gallo has filed a lawsuit against Google on behalf of individuals seeking compensation for invasion of privacy. Gallo says that if you do not use Gmail but sent an email to a Gmail user, Google intercepted it and processed it for advertising purposes, and you may be owed $5,000 under the California Invasion of Privacy Act.READ MORE
People Angry with Department of Motor Vehicles Violating their Privacy

Charlotte, NC: “It’s reassuring that attorneys are trying to stop the DMV from selling our private information,” says Gary. “I wondered how these companies got my address and phone number—until I read on LawyersandSettlements about an attorney filing complaints about DPPA violations.”READ MORE

Posted by
Tracy Brokmeier
on October 9, 2016
A medical supply company released personal information on my child including his health insurance information and information pertaining to a prescription we had with this particular company to some random woman on Facebook that I've never met before in my life. I need to know what my rights are immediately.