Send your Fixodent Denture Cream Poisoning claim to a lawyer who will review your claim at NO COST or obligation.
GET LEGAL HELP NOW

The US Food and Drug Administration (FDA) issued a warning in October 2011, about the risk of adverse events, including nerve damage, linked to overuse of denture adhesives. The agency warned that use of two or more tubes a week of denture adhesive that contains zinc could be linked to an increased risk of adverse events and noted that extra adhesive should not be used to keep dentures in place. The agency also noted that denture cream manufacturers should include zinc on their list of ingredients if their product contains the mineral.

Lawsuits have been filed against the makers of denture adhesives, including Fixodent, PoliGrip, and Super PoliGrip, alleging the products caused zinc poisoning that led to severe and disabling injuries. The lawsuits were filed following the release of research that linked overuse of denture creams to neurological problems. 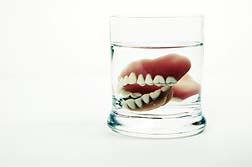 In the paper, published in Neurology in 2008, researchers at the University of Texas Southwestern Medical Center in Dallas, state, "Denture cream contains zinc, and chronic excessive use may result in hypocupremia and serious neurologic disease." Researchers also found a risk of hyperzincemia.

Hyperzincemia is zinc toxicity while hypocupremia refers to abnormally low levels of copper in a person's blood.

The researchers found that in the denture-wearing patients they studied, the residual zinc levels were higher than normal—in the range of 1.36 to 4.28 micrograms per mL. Levels of 1.10 microgram per mL are considered normal.

One patient complained of weakness in the arms and legs, so much so that she had become wheelchair dependant. She had also developed urinary incontinence and cognitive decline. Another patient complained of weakness in the feet and hands and poor balance. All the patients in the study had been using denture creams for years, and often excessively.

Results from tests done using the denture creams the patients used revealed zinc levels between 17,000 and 34,000 micrograms per gram. The researchers concluded that this was the only "plausible explanation" for the patients abnormally high zinc levels.

Products that are allegedly linked to zinc poisoning include PoligGrip, Super PoliGrip and Fixodent. Symptoms of excess zinc include weakness in the hands, arms and legs, poor balance, lack of coordination, numbness, tingling, pain and a burning sensation.

Patients who suspect they have zinc toxicity should see their doctor right away and have testing conducted as soon as possible to confirm whether or not they have hyperzincemia or hypocupremia.

To be eligible for a lawsuit against denture cream makers, you must have a blood test to determine the levels of zinc and copper in your system. It is important these tests are done while you are still using the denture cream because the copper and zinc levels could return to normal once the cream is discontinued, even if permanent damage has already been caused. If your zinc levels return to normal—despite the presence of permanent injury—it is almost impossible to prove that denture cream has caused zinc poisoning.

Therefore, if you are using denture cream with zinc and have symptoms of neuropathy or neurological damage, talk to your doctor about having a blood test to determine the zinc and copper levels in your system. If you have already stopped using the denture cream, talk to a doctor as soon as possible about having the blood tests conducted.

If you or a loved one has suffered adverse health effects related to the use of denture creams, please click the link below and your complaint will be sent to a lawyer who may evaluate your claim at no cost or obligation.
Please click here for a free evaluation of your Fixodent Denture Cream Poisoning claim
Last updated on Oct-7-11

The Food and Drug Administration (FDA) is warning the public about overuse of zinc-containing denture adhesives and associated adverse events such as nerve damage and numbness. The warning was prompted by case reports in the literature as well as the agency's own adverse event reporting data, showing a link between these side effects and chronic use of zinc-containing denture adhesives.READ MORE
GSK Reported to Have Paid $120M in Poligrip Settlements

According to a report on Reuters.com the maker of Poligrip products, GlaxoSmithKline, has paid at least $120 million to settle claims that allege the denture cream causes or caused neurological disorders.READ MORE
Study: Denture Cream Can Cause Zinc Overdose

According to a recent study conducted by researchers at the University of Maryland, denture cream and adhesives can cause zinc overdoses, potentially leading to serious neurological damage.READ MORE

Posted by
GEORGE Holliman
on June 22, 2022
Cognition seems to be impaired.unexplained dizziness and new balance problems
Posted by
cathy few
on July 18, 2016
my husband started have weird spells, seisure like, symptoms, and he would get a strange metallic smell, they lasted about 10 seconds each, they became more often and he had hard time focusing, dizzy, just weird. he was hospitalized and they tested his, heart and brain, clueless, stayed 4 days and released. I saw something about the Zinc warning for Fixodent, stopped using it, spells have stopped
Posted by
ROSEMARY JOHNSON
on April 7, 2016
could "fixodent" contribute in any way, to interfere with my anti-depressant? I have trembles and tingling and light-headed-ness?
Posted by
Barbara Vallimont
on January 13, 2016
I have been suffering headaches and my eye sight has changed. I also have been suffering with nasal congestion. Don't know what I can do. Been to a ears, nose, and throat doctor. A week ago and I am still suffering.
Posted by
Iowa
on February 12, 2011
I'm 44 yrs old, my muscles are weak & ache and I have problems with my balance, my vision is horrible with headaches daily with memory and concentration problems!
Posted by
Oregon
on September 27, 2010
I have extreme pain when I walk and numbness in both legs making it difficult to keep balance and also fall a lot!
Posted by
Mississippi
on February 9, 2010
Long term nerve damage in legs and feet.