Daypro (oxaprozin), a Nonsteroidal Anti-Inflammatory (NSAID) prescribed to treat the pain and inflammation of osteoarthritis and rheumatoid arthritis, works by reducing hormones that cause inflammation and pain in the body. However, Daypro has been linked to Stevens Johnson Syndrome (SJS) and SJS allergy lawsuits.


Click here for a free evaluation of your Daypro claim
SJS Daypro allergic reactions are common and NSAIDS is one of the leading classes of drugs that cause Stevens Johnson Syndrome (SJS), toxic epidermal necrolysis (TEN) and anderythema multiforme (EM) reactions. 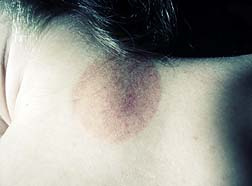 Daypro had a higher reporting rate of Johnson Syndrome and Toxic Epidermal Necrolysis (SJS & TEN) than any other prescribed NSAID during its first year on the market. From 1993 to 1997 Daypro caused more deaths from serious skin reactions, including SJS and TEN, than any other prescription NSAID: By early 1994, four fatalities were associated with this drug and SJS.

Post –marketing reports have shown that women and persons of low body weight have a higher percentage of adverse skin effects of all types to this drug than men due to Daypro having a long half-life (the time it takes for the blood plasma strength of the medication to be lessened by one-half). In other words, the amount of the drug available is greater in the blood stream for a longer period of time, which can increase toxic reactions and potentially lead to SJS.

G. D. Searle & Company, the manufacturer, received FDA approval of Daypro in 1992, but not before the agency had rejected the drug company's submission on three previous occasions. The application process took about 10 years due to insubstantial evidence that it was no more effective than existing drugs to treat arthritis (the FDA said it was comparable to, but no better than, aspirin) and because of increased incidence of certain adverse events.

Stevens Johnson Syndrome (SJS) is a rare inflammatory skin disorder that can be life-threatening. The disease causes lesions in the mouth, eyes and on the body. Stevens Johnson Syndrome can occur at any age although the majority of cases range between the ages of 20 and 40. One-fifth of the cases occur in people under the age of 20.

In some cases, permanent skin damage and scarring occur. Lesions on internal organs can cause serious inflammation of the lungs, heart and kidneys. Up to 27 percent of those affected by Stevens Johnson Syndrome or related illnesses incur long term eye damage or vision loss. Upwards of 15 percent of patients with this syndrome die from the condition.

If you or a loved one has suffered from Stevens Johnson Syndrome due to taking Daypro, please click the link below to send your complaint to a lawyer to evaluate your claim at no cost or obligation.
Please click here for a free evaluation of your Daypro claim
Last updated on Sep-25-09

A woman from Texas has filed a lawsuit against the manufacturers of Motrin after her daughter allegedly developed Stevens-Johnson Syndrome after taking the drug and needed to be hospitalized for more than a month, the Louisiana Record reports.READ MORE
READ MORE Drugs/Medical Settlements and Legal News