Zyprexa Side Effects are Deadly

There appears to be no group that is safe from the deadly side effects of Zyprexa. Seniors with dementia who are given the drug are at an increased risk of death, adults and children have a risk of suicidal tendencies and those who survive that may suffer from serious weight gain and diabetes. With all these potentially dangerous side effects associated with Zyprexa, can it still be said that the benefits of the drug outweigh the risks?

In the last two years, federal regulators announced that seniors with dementia who are given Zyprexa could die from taking the drug. Zyprexa was not approved for use in seniors with dementia, but that allegedly did not stop Eli Lilly from marketing the drug for such use. Even after the announcement about the risk, one quarter of seniors still take Zyprexa, Risperdal or Seroquel (about which a similar warning was given). In fact, sales of these drugs totaled $13 billion in revenues this year. Sales of Zyprexa to patients over age 64 accounted for more than 26 percent of the medication's total prescriptions. 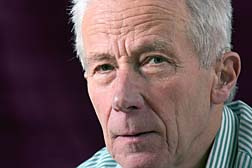 In February 2007, Dr. David Graham, a frequent critic of high-risk drugs, spoke before a congressional panel. In his testimony he argued that Zyprexa and other antipsychotic medications caused the deaths of around 15,000 nursing home residents every year. Yet seniors are still prescribed Zyprexa to treat their dementia.

It is not illegal to prescribe drugs for off-label uses. However, marketing drugs for unapproved uses is illegal. According to the [St. Petersburg Times,] Eli Lilly allegedly created a 280-person "long-term care" sales force, designed to focus on senior citizens. Furthermore, internal Eli Lilly documents referred to nursing homes as an "opportunistic market." The company even encouraged sales representatives to use an imaginary patient, named "Martha" to increase sales. Martha is described as a widow who lives alone. She suffers from confusion, inability to sleep and agitation. She is also described as an ideal candidate for Zyprexa even though she is a senior and may suffer from dementia.

Zyprexa (known generically as olanzapine) now has a black box warning alerting consumers to the risk of death in seniors with dementia. The FDA found that elderly dementia patients who took atypical antipsychotics (including Zyprexa) have a rate of death 1.6 to 1.7 times greater than those who took a placebo.

Meanwhile, many adults and teenagers who take Zyprexa are at an increased risk of suicidal acts compared with patients who take other drugs. According to five clinical trials conducted by Eli Lilly, of 2,500 patients in the trials, 12 committed suicide. However, that number only reflects how many people actually committed suicide, not how many people attempted to commit suicide or expressed suicidal wishes. At least one Eli Lilly critic, Dr. David Healy, believes Eli Lilly is suppressing information about the risk of suicidal tendencies in patients who take Zyprexa.

Zyprexa has also been linked to akathisia, which is a precursor to suicide and violence. Akathisia is a condition in which patients suffer from an overwhelming feeling of restlessness, leading to a need to constantly be in motion. Many people who have akathisia also suffer from insomnia, panic, anxiety and a feeling of doom.

Zyprexa has also been linked to an increased risk of weight gain, high cholesterol and diabetes. In October 2007, Eli Lilly added strong warnings to the drug, noting that Zyprexa causes high blood sugar more frequently than other atypical antipsychotic medications. According to the new label, patients taking Zyprexa can continue gaining weight for up to two years after they first take the medication. Furthermore, one in six patients taking Zyprexa will gain over 33 pounds during those two years.

More News
But that is not all. According to Eli Lilly's internal documents, around 30 percent of patients taking Zyprexa gained 22 pounds or more after only taking the drug for a year and 16 percent gained over 66 pounds in the same time frame. Some Zyprexa patients gained over 100 pounds. Zyprexa patients are also 3.5 times as likely to develop high blood sugar as patients taking a placebo according to Eli Lilly's tests. And yet again, Eli Lilly allegedly downplayed the risks of Zyprexa when speaking with doctors.

According to [The New York Times,] Eli Lilly is still asking the FDA for permission to market Zyprexa for adolescents, even though clinical trials have shown that weight gain and other problems associated with the drug can be more severe in teenagers than adults.

Since 2004, Eli Lilly has spent $1.2 billion settling 28,500 lawsuits from patients who claimed they developed diabetes or heart problems after taking Zyprexa. There are still over one thousand lawsuits that have not yet been settled. That does not include potential lawsuits from people whose loved ones committed suicide while taking Zyprexa.
READ ABOUT THIS LAWSUIT

Posted by
Timothy
on November 27, 2019
Need more information. On 2 side effect m having I can't sleep I can't sit still constantly need to move currently taking Zyprexazidis
Posted by
Nancy King
on January 12, 2018
My mother had to be on this medication in 2007 because the arthritis medication she was taking, Relafen, had caused internal bleeding and it had caused her to have mental problems. She gained 16 pounds in 2 weeks, which wasn't good for her arthritis. Fortunatly for her, she is still alive, (I read somewhere that a 33-year-old man died in his sleep from taking this medication) and didn't get diabetes from the medication. She has listed Relafen and Zyprexa as the medications she's allergic to when she has to fill out paperwork. What is the most terrible about it, though, is that we trusted the doctors who prescribed the medications and that we trusted the people who told us to go to them, saying that they came "highly recommended". One was a bone doctor, the other a psychiatrist. Both medications should be taken off the market before they kill anyone else.
Posted by
Donna Grubb
on October 13, 2016
Help please I'm being threatened to be locked away if I dont take this my hair is falling out iwas born hypoglosimic all siblings diabetics full heart also iv been to hospital several times I have scars from lesions n kidney problems damage done in a 6 month period please help before its 2_late before I found information
Posted by
Kesi A. Falls Sr.
on November 29, 2015
I was Started on the Medication ZYPREXA, in December of 1999 to 2008. I reside in Indiana & NO Attorneys will Help in my Complaint, I have had 2 Different "Conflicts of Interest" for the Fact Both Firms Worked for the Lilly Company, And withhold my Documents For Years Before Telling Me that Their Firms Could not Handle my Case & Due to Time Limitations my Complaint is in Jeopardy.. Where Can I Find Help???
Posted by
Sheryl Cook
on April 7, 2014
My Grandfather, age 88, suffers from dementia. he was prescribed Zyprexa for "sleep". He was already seeing things such as his dead relatives, people in his bedroom, etc. Since taking the drug, he now believes people on t.v. are actually there. He has had many bouts of increased confusion. He is struggling more with recognizing family. This scares us. As he has NEVER been through or witnessed and felt such real fear and panic. Why would his Dr. put him on what he thinks is his sleeping pill knowing the risks in the elderly. His fear is REAL. His panic episodes are disturbing and worry us. let alone how he feels. Our family is in a constant war because half believe and trust his Dr. while the rest of us feel he should STOP ZYPREXA IMMEDIATELY!!!! PLEASE HELP US to help our beloved live what's left of his life with quality and peace.