No Thanks, Zyprexa Diabetes

You can understand a patient’s reticence over starting the antipsychotic drug Zyprexa and the potential for the onset of Zyprexa diabetes. One 65-year-old bipolar patient who submitted a question to Drugs.com posed that very question after being started on 10mg of Zyprexa. 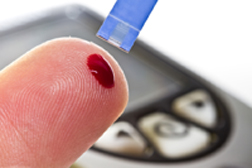 The answer to that question was that while Zyprexa overall is considered safer than older antipsychotic drugs such as Haldol, there are risks nonetheless, including Zyprexa hyperglycemia.

A responder to the Q&A over Zyprexa side effects noted that she had taken Zyprexa on and off for short intervals. She noted that while she was on Zyprexa, she experienced an intense craving for sweets. The responder noted that the cravings were one of the reasons why she disliked taking Zyprexa and eventually stopped taking it.

Years later the responder was diagnosed with diabetes, although she failed to see any connection between Zyprexa and diabetes due to the long time frame between coming off the drug and the onset of her diabetes.

That said, the medical community maintains that Zyprexa hyperglycemia, in some cases extreme and associated with ketoacidosis or hyperosmolar coma or death, has been reported in patients treated with atypical antipsychotics including olanzapine (Zyprexa).

Meantime, there remains a growing concern over the prevalence of antipsychotic drug use such as Zyprexa in children. The Valley News (10/4/14) noted that according to information released by Medicaid, there were 16 children prescribed antipsychotic drugs (including Zyprexa Olanzapine) aged three through five years, 415 children ages 6 through 12, and 774 children aged 13 through 17.

Could Zyprexa diabetes be an issue for them?

While the Vermont report noted that antipsychotic use amongst children in Vermont is dropping while juvenile prescription rates across the nation are increasing, Dr. David Rettew, associate professor of psychiatry and pediatrics at the University of Vermont’s College of Medicine, reported during a recent meeting of the Legislative Committee on Mental Health Oversight that about half of doctors are failing to undertake their due diligence before prescribing antipsychotic drugs - many of them described as powerful - to children as young as three years of age. “You should only be using these medications in the context of a careful, comprehensive plan, and should explore alternatives to medication first,” said Rettew, who described himself as a “passionate moderate” when it comes to medicating children.

Meanwhile, at the other end of the demographic scale, two nursing homes in California are being sued by the US Department of Justice (DOJ) for allegedly defrauding Medicare and Medicaid through the severe overmedication of residents.

More ZYPREXA News
One of the examples cited in the False Claims Act lawsuit (US v. The Arba Group et al., case number 5:14-cv-03946, in the US District Court for the Northern District of California) was that of a 101-year-old woman who was admitted to one of the defendant nursing homes in 2009. The woman was allegedly administered a cocktail of five drugs - Zyprexa Olanzapine among them - shortly after she arrived at the facility.

With antipsychotic drugs increasingly used to quell symptoms such as bipolar disorder in a multitude of patients as young as three years of age, it is little wonder that plaintiffs are wont to consult a Zyprexa lawyer when various Zyprexa side effects appear; and perhaps needlessly if the prescription wasn’t really necessary in the first place.

As for the relationship between Zyprexa and diabetes, plaintiffs will note that it is possible for other factors to lead to diabetes, including a family history, without any help from Zyprexa, thank you…

Posted by
George Ion
on September 8, 2015
Took Zyprexa for about a year, between 2003 and 2004. Just got diagnosed with diabetes, last glycemia check-up found in records was since 2004 when it was slightly elevated.