On October 27, 2007 Ellie went to her last barbeque. She was at a party with her parents and brothers. All day, people at the party were given rides on a Yamaha Rhino ATV. Early in the evening it was finally Ellie's turn. But at some point during the ride the vehicle flipped and killed her. She was just 10 years old.

"We were at a friend's house for a gathering, a family gathering, lots of families and children," said Ellie's father, John." So there was no alcohol there whatsoever, no drugs, no drug users. The host of the party wanted to make sure there would be no accidents or trouble, because there were children, and teenagers there. Our friend has about 60 acres of land, and the field that people were going in on the Yamaha was a ploughed corn field. So there was corn stubble, that sticks up a few inches, but it's not very high. The field is completely flat." 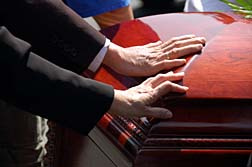 The host of the party had been driving the Rhino most of the afternoon, and wanted to get back to his guests and cook some hot dogs. "So a 22-year-old man started taking people out for rides instead. He took my daughter out. He wasn't acting in a crazy way. This was about 8:00 pm," John said.

What happened next was nothing short of a tragedy. According to the accident reconstruction specialists who came out the next day, the driver of the Rhino was making a right turn. "The police think he was doing about 12 miles per hour. He was cutting across the field to the right, and the Rhino started turning left, so he immediately cut the wheel the other way. The ATV straightened up for a second, and then carried on tipping over to the right. My daughter fell out and the roll bar landed on her head. It crushed her skull," John said.

Ellie was air evacuated to a hospital. "She was on life support for 24-hours following that. But the doctors had determined early on that she was brain dead, so we made the decision to terminate the life support," John said. "There was a nurse at the party, as a guest, and she assured myself and my wife that our daughter was unconscious at the scene of the accident. Some of the witnesses said Ellie had her seatbelt on.

I have photographs of the tracks that the Yamaha Rhino made. My wife and I went out to the scene about three days later, and we couldn't believe that the vehicle would have slipped, from looking at the tracks. At first I thought it must have been the fault of the guy who was driving. But now, eight months later, after I've done a lot of research, I feel differently about it. I know now how these vehicles flip," John said.

He is aggressively pursuing Yamaha. "My lawyers have thoroughly checked this out, and talked to other lawyers that have pursued this," said John. "Personally, I have found 12 or 13 other families that have lost children between the ages of eight and 13 as a result of riding in the Yamaha Rhino. I found one family with an 18-year-old and another that was 26. I went to the Orange County Superior Court's website and there are well over 30 suits documented against Yamaha right now, for injuries related to riding in this vehicle. I was able to locate the first man who sued Yamaha, and he had broken his leg. He said the whole reason he sued Yamaha was so he wouldn't get a phone call like mine. He did not want to hear a story like mine, where a child had been killed riding in this vehicle.

More YAMAHA RHINO News
Although I have masses of bills now, and am probably due compensation, I feel the same way as this gentleman. I know what it was like watching my daughter lay in a hospital bed, and making the decision to turn off life support. I know what it was like sitting in the waiting room telling her brothers that their sister was going to die now. Telling them that this will be the last time they see her. Believe me, I don't want any other parent to have to do that. It is the worst thing that anyone could ever have to go through," John said.

By his own admission, John is on a bit of crusade. "I would like this story to be told," he said. " I may be able to talk about this in a very matter of fact way, but I can guarantee that once or twice a day my wife and I have major breakdowns about it. To lose a 10-year-old girl so suddenly, is unbelievable."

Posted by
rick
on October 18, 2018
i would habe to say that the 22 yr old was trying to get the rhino to fish tail (drift) and thats what cause it to roll even of the ground was perfectly flat just the sudden change of direction can make anything roll over. i can speak with experience with a rhino ive taken mine across steep pasture where roll overs are more likely to happen and mine has held to the ground like its glued to it.. lack of common sense is far from yamahas fault. youre the special kind of person that would blame the company that built a chainsaw if you cut your leg while operating it, and for that i cant even blame the 22 yr old that was driving it this was all your fault for not making sure your child was in a seat belt and wearing a helmet. i grew up on atvs snowmobiles dirtbikes etc. and when we had family get togethers it was nothing for members of the family that didnt have an atv to take someone elses my uncle rolled my honda foreman because he wasnt experinced enough to ride it in places where i rode everyday and never even had a wheel come off the ground and my old foreman i put right with my rhino they are both very well built to hold to the ground. i think to many amatures think that because a side by side is built like a car that they know how to drive it safely and even driving safely there are always things that can happen no one expects maybe a tire on one side is a little lower in air so a sharp turn one way nothing happens but sharp turn the other way and the low tire grips the ground harder and that will roll you over. i couldnt imagine losing one of my kids in any kind of accident but throwing the blame onto the machine
Posted by
Rick
on July 1, 2017
Why were the seat belts not used. I would say driver and the owner of the Rhino are at fault for not ensuring a minor was seatbelted in.

Sorry for the loss. But you as the father should have inspected and insisted your daughter be buckled in safely.

You are the reason this accident happened.

You are what is wrong with this country.

You are not due any compensation.