It was a Tuesday morning, around 8:30 a.m.. Brad Begley was waiting outside an office situated along U.S. Interstate highway 54, between Wichita and Augusta. Suddenly, the noise of the early morning commuter rush was broken by the sound of a truck horn blaring. It forewarned of a fatal truck accident that would occur just minutes later.

The truck driver, 36-year old Laura L. Alexander, from Conway Springs, was returning from a trip to a local quarry - her rig, a 1995 Kenworth semi, was loaded with rocks. She was leaning on the horn in an effort to warn people. 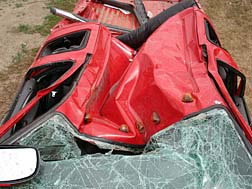 "Hearing the truck's horn, Brad Begley turned and saw the truck as it turned onto Sante Fe Lake Road, approaching U.S. Route 54. "Then I figured something's going to happen here - bad," he said. At that very moment, Brad saw a red Chrysler heading in an eastbound direction - heading, in fact, directly for the truck. "No swerve. The driver might have hit the brakes but we sure didn't see it," Begley said.

Kansas Highway Patrol Trooper Chuck Stangle, who arrived at the scene of the accident shortly after, said Gail R. Graham, a 50-year old resident of Wichita was the driver of the Chrysler. She died at the scene. Stangle also said that several witnesses heard Laura Alexander, the driver of the rig, honking as she approached U.S. Route 54. Of course, at the time, no one knew that the truck's brakes had failed, but that's probably what happened according to a preliminary investigation, Stangle said. The investigation is ongoing. But there appear to be several good witnesses, as there were at least three motorists heading west on the highway who saw the accident.

More News
Was speeding involved? The speed limit at the scene of the accident, on U.S. Route 54, is 65 miles per hour, and 40 miles per hour on Sante Fe Lake Road. There was no indication that either the Kenworth semi or the Chrysler were speeding. However, Gail Graham, the driver of the Chrysler passed a flashing yellow light, with a "Be Prepared to Stop" sign posted approximately 150 yards before the intersection. This had recently been installed in an effort to alert motorists of the traffic signal up ahead.

While neither vehicle appears to have been speeding, it may be that the traffic signal played a part in this terrible accident. Craig Murphy, a Sherriff of Butler County, explained that the light was put in to try and prevent these kinds of accidents from happening. For years before the traffic light was installed, people complained about the lack of a signal there, he said. "I know we have had accidents since the light was put in. So, it seems that light is not a solve-all thing," he said.