A woman has filed an auto defect lawsuit against Action Chrysler Jeep Dodge alleging the car dealership is liable for her son being ejected from his truck during a Texas car accident. 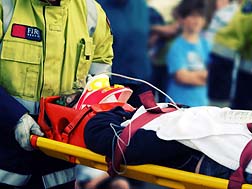 Ronita Harris filed the suit on September 21, which states the dealership "marketed and represented that said vehicle was safe, when in fact it was unsafe," the Southeast Texas Record reports.

More TEXAS CAR ACCIDENT News
According to the suit, Antonio Harris, the plaintiff's son, was driving a 2005 Dodge Truck when he lost control and skidded through an intersection. During the incident, the truck's front door reportedly opened after the vehicle struck some trees, allowing the driver to be partially ejected.

Eventually Antonio was fully ejected from the truck after the buckle of his seatbelt came undone.

The plaintiff added in the suit that the vehicle violated principles of crashworthiness, failed to provide proper restraint, violated the purpose of a seatbelt buckle and was not tested thoroughly.