Any car accident can be heartbreaking—especially when it involves personal injury or death. The heartbreak quotient goes up a notch when a young person is involved and a promising life is cut unexpectedly short. Such was the case with a recent Texas car crash that claimed the life of an 18-year-old soldier about to see his first tour of duty. Instead, he died in a horrific freak accident mere miles from his home. 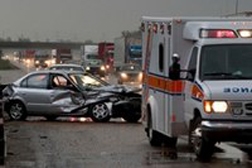 It was just a few days after Christmas when Spc. Clinton Young, on leave from the 14th Military Police Brigade at Fort Leonard Wood, Missouri, was navigating his car along US 287 in Southeast Fort Worth, when his car struck a guardrail. While that could have been the end of the beloved young man right then and there, the details of this most tragic of Texas accidents do not end there.

According to the December 30 edition of the Fort Worth Star-Telegram, Young emerged from his car after crashing into the guardrail December 28 on an overpass along US 287. According to the details of the accident as told to the Young family by police, the initial crash set off a chain reaction of events that included the crash of an 18-wheeler which jack-knifed just beyond Young's vehicle, blocking the road.

A second tractor-trailer rig stopped when it found the road to be blocked by the first truck. All seemed to be calm by this point, and the worst appeared to be over, when the most tragic aspect of the car crash in Texas occurred.

More TEXAS AUTO ACCIDENT News
According to the Star-Telegram, an oncoming vehicle, whose driver presumably had not seen the road blockage ahead or was travelling too fast to avoid it, slammed into the second tractor-trailer and careened directly into the doomed young soldier, who by this time had emerged from his vehicle and was standing alongside the guard rail, beside his own stricken vehicle, at the top of the overpass.

The collision threw Young over the edge of the overpass. He fell what were described as "dozens of feet" onto the East Loop 820 below, where he died.

It is not known if a Texas accident attorney will be brought in to consult with regard to the accident. For now, a full military funeral is planned with a further memorial to be conducted at Fort Leonard Wood early in the New Year.

Texas car accidents, akin to other such accidents in any state of the union, are always tragic in their own, unique way. In this case, a merry Christmas for the Young family has been offset by what was most assuredly an unhappy New Year…

If you or a loved one have suffered losses in this case, please click the link below and your complaint will be sent to an accidents lawyer who may evaluate your Texas Auto Accident claim at no cost or obligation.
Request Legal Help Now