More TEXAS AUTO ACCIDENT News
A mother and her teenage son were recently killed in a Texas car accident that may have been caused by street racing. 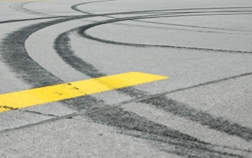 Mayra Torres was driving with her son and six-year-old daughter in a minivan when Harris County Sheriff's Office investigators said they were struck by a Chevy Tahoe while making a turn at an intersection, according to KIAH-TV Houston.

Authorities say that the 17-year-old driver of the SUV may have been street racing, as the vehicle had left tire marks for several feet. "According to witnesses, it appears [the Tahoe driver] was racing another vehicle," a detective told the news source.

Three teens inside the Tahoe reportedly suffered minor injuries, and Torres and her son died at the scene. Torres' daughter survived the crash but is in critical condition, reports the news provider.

There were 3,382 traffic fatalities in Texas in 2008, according to the National Highway Traffic Safety Administration. That number represents the second-highest total in the country, second only to California, with 3,434 fatalities.

Posted by
Lema
on September 13, 2011
It's so sad to hear about cases like this where tragedy is a result of plain carelessness. I live in Texas, and knew that there was a high rate of traffic fatalities here, since I often hear these types of accidents discussed by car accident lawyers in my area, but I had no idea that Texas has the second-highest number of these accidents in the country! I hope we can all do our part to pay more attention and drastically reduce this number.