More SECURITIES News
A criminal indictment has identified a former prison guard from Saskatchewan, Canada, as one of the six people accused of orchestrating a $60 million stock fraud scheme. 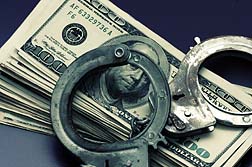 Urban Casavant is the only one of the six who remains at large and is thought by some U.S. authorities to be living somewhere in Canada, the Vancouver Sun reports. His name surfaced after U.S. prosecutors pushed to have the indictment unsealed after the other five accused were apprehended.

The U.S. Department of Justice has also charged Casavant with income tax evasion in connection with the complex penny-stock fraud scheme that used a front company known as CMKM Diamonds.

According to this indictment, CMKM had few assets, did not conduct regular mining operations and did not sell or produce any diamonds.
"CMKM did not even have an office, but instead shared Casavant's home in Las Vegas," states the indictment.

According to the Sun, Casavant was seen by a Saskatoon StarPhoenix reporter at a home that he reportedly owned in Saskatoon. That home is currently on the market to be sold.