On April 29, 2008 a 72-year-old man was sentenced to 330 years in prison for a high yield investment scheme. The scheme included securities fraud, mail fraud, and wire fraud. The man, Norman Schmidt, was found guilty after an eight week trial concluded on May 29, 2007. 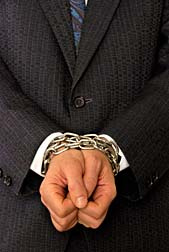 In the fraud scheme, Schmidt and his group scammed people by guaranteeing them that they would receive a monthly return between 2% and 400% of their investment. The monthly statements the group sent out each month were fraudulent and they encouraged their victims to continue sending in money. The statements would have one of several names on them. Those names were Smitty's Investments and Reserve Foundation Trust, Capital Holdings, Fast Track, and Monarch Capital Holdings.

More News
The evidence presented at the trial showed that tens of millions of dollars was acquired by Schmidt from hundreds of investors. Instead of Schmidt investing the money, he used it for his own personal expenses. The money was seized by investigators in approximately 60 bank accounts, a race track, 8 NASCAR cars, around $24 million in property, and in cash. So far, $18 million has been returned to the investors. However, U.S. District Judge Robert E. Blackburn ordered Schmidt to turn over approximately $38.4 million.

In addition to Schmidt, his wife Jannice Schmidt, and five other individuals were indicted on March 10, 2004 by a federal grand jury. Jannice Schmidt received a prison term of nine years. Three others are awaiting sentencing, while one has already been sentenced to one year and one day and another is still at large.