A product recall is only as good as the capacity to reach those with the power, and the responsibility to respond. If the message doesn't get through, the result can be a recalled product like the Kugel Mesh Hernia patch continuing to be used, with the potential for serious injury.

That's what allegedly happened to Judith Coyne, a woman from Virginia Beach who received one of the recalled Kugel Mesh patches months after the final recall of the product was announced. 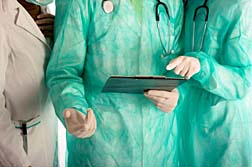 And apparently, she wasn't the only one.

Most by now are well-versed on the Kugel Mesh story. The Bard Composix Kugel Mesh patch was considered a revolutionary product when first introduced to the market by Davol. The patch could be inserted by minimally-invasive surgery, then expanded to full breadth in the abdominal cavity with the help of a recoil 'memory' ring.

However, there were soon reports of the memory ring breaking at the welds, potentially exposing patients to sharp edges that could impact and injure internal organs, including the potential for bowel perforations. The elevated reports prompted the US Food and Drug Administration (FDA) to trigger a Class 1 Recall—the most serious—in concert with the manufacturer. In fact, there were two recalls beginning in 2006, with the most recent triggered in February of 2007.

By that time, the media was rife with reports with regard to the Kugel Mesh Patch. However, somehow word allegedly didn't get to Sentara Virginia Beach General, and Sentara Leigh hospitals. In fact, it was revealed earlier this summer that four patients at the Virginia Beach location, and three patients at Leigh were implanted with the recalled Kugel Mesh hernia patch months after the final recall went out.

Judith Coyne was one of those patients. She underwent surgery last June—months after the recall—and was soon experiencing excruciating abdominal pain. With the help of her son, Coyne obtained her medical records and traced the product code and lot numbers of the recalled products and compared them with what she had received.

Sure enough, Coyne had been implanted with one of the recalled devices, a fact that the hospital initially denied, but then later acknowledged. A spokesperson for the two hospitals issued a statement to the media suggesting that while the hospital was duly informed about the recall, the fact the recall rolled out in stages proved a source of confusion.

That said, the spokesperson indicated that the seven patients into which the defective Kugel Mesh patches were implanted was the result of human error.

That doesn't help Judith Coyne. She told a Virginia TV station that doctors have told her the mesh has become affixed to her organs in such a way that doctors are unwilling to operate for fear of killing her. It leaves her not only in pain, but with the fear that a recalled product is inside of her and could fail further—and yet she has no recourse, according to her doctors, without fear of losing her life in the process.

Talk about running out of options.

Soon after the recall, Davol revised the design of the so-called memory ring, strengthening the welds. Meanwhile a number of lawsuits have been launched against the manufacturer by patients who have had their health compromised by the defective Kugel Mesh product.

More KUGEL MESH News
Beyond that, however, is the failure of whatever system is brought to the fore with regard to the communication of a recall to the medical community, and how that information is dealt with once received. It is inconceivable to think that a hospital—any hospital—whose mandate is to sweat the small stuff and champion the details in the name of responsible patient care, could somehow miss both the plethora of media reports, and official recall notices.

And a Class 1 recall at that.

Either the recall framework was, in this case, overly convoluted—or someone allegedly wasn't paying attention. Whichever is proven to be true, the fact remains that reforms and improvements are necessary to avoid such accidents that compromise human health.

And if the fear of a compromised patient isn't enough, perhaps the lawsuits will do the trick…

If you have suffered losses in this case, please send your complaint to a lawyer who will review your possible [Kugel Mesh Lawsuit] at no cost or obligation.
Request Legal Help Now