In May, the estate of a 68-year-old Ohio man who died in 2004 after hernia surgery sued the makers of a device used in that surgery. The device was the Composix Kugel Mesh Patch, made by Davol Inc.

This is not the first lawsuit claiming injuries or death resulting from a defective Composix Kugel Mesh Patch.

The patch is one of a group of hernia repair devices sold by Davol Inc. and its subsidiary company C.R. Bard Inc. A "memory coil"—a plastic ring under tension in the patch--causes the patch to pop open inside the abdominal wall after it has been inserted through a slit at the hernia repair site. 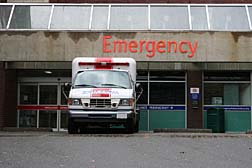 Some of the patches have failed, usually some time after the surgery, when the memory coil has broken open. No longer a coil, it has become thin piece of plastic with two sharp ends, and for many patients has migrated through the abdomen causing serious injuries and death. Broken Kugel Mesh memory coils have perforated bowels, attached themselves to other organs or created fistulas (abnormal connections or passageways between the intestines and other organs), and have stuck to other internal organs.

The Ohio man who died, Richard Kinney, had undergone a hernia repair October 27, 2003. But three months later, he was back in the emergency ward. Medical personnel discovered he had a bowel obstruction at the site of his hernia repair. Over the next six days, he underwent three surgeries, including removal of his small bowel and spleen. Unfortunately, Kinney's condition continued to worsen, and he died March 9, 2004, not much more than four months after the initial operation. It would be another 21 months before the first Kugel Mesh recall would take place.

More News
The Kugel Mesh patch used in Kinney's operation was not from any of the lots recalled by the manufacturer, however the claim made in the lawsuit is that the patch was defective, and that the manufacturers knew of the high failure rate of the devices.

Time (and the courts) will tell just how many people the Kugel Mesh patch has hurt, and over just what length of time.

The obituary for Kinney described him as a U.S. Navy veteran, a 38-year volunteer fire fighter, and formerly a firefighter for Goodyear Tire & Rubber. Before the hernia repair surgery, he had been actively enjoying his retirement, swimming and playing golf. He and his wife of 48 years were enjoying spending time with their four children and seven grandchildren.

What a loss for the Kinney family.