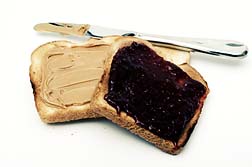 Claims timely and properly filed before the deadline will be evaluated by an expert appointed by the bankruptcy court to receive a portion of a $12,000,000 fund set aside for qualified salmonella claimants. Should the value of qualified claims exceed the limits of the fund, Kellogg Company and Kanan Enterprises, Inc. have agreed to pay the difference.

What do I do If I have a Salmonella Claim?
Persons who tested positive for salmonella after consuming peanut butter products such as Austin and Keebler brand crackers should contact the salmonella lawyers at Simon & Luke in order to protect their rights to settlement funds.

You cannot wait to assert your claim - you must begin the process immediately. Properly preparing a qualified claim takes a substantial amount of time and requires collection of numerous medical records, medical bills, health department records, pay stubs, and other materials to substantiate your claim, along with the preparation of numerous forms and securing the written opinion of a qualified epidemiologist in certain cases.

Ron Simon and Simon & Luke have represented thousands of people across the United States, Mexico, and Canada who have been victimized by contaminated food products. The firm has recovered over $400,000,000 for its clients, including numerous settlements in excess of one million dollars. The firms has handled over 2000 salmonella claims in the last 2 years alone and currently represent over 100 victims of this salmonella outbreak, including 2 families that lost a loved one.

The Salmonella Peanut Butter Outbreak - A Recap
Health officials at the Center for Disease Control (CDC), Food and Drug Administration (FDA), and numerous state agencies identified peanut butter and peanut paste manufactured by Peanut Corporation of America (PCA) as the source of Salmonella Typhimurium that poisoned over 714 people and killed nine in a salmonella outbreak that began on or about September 1, 2008. The contaminated peanut butter and peanut paste was manufactured by PCA at its peanut processing plants in Blakely, Georgia and Plainview, Texas.

Illnesses began on September 1, 2008. Patients ranged in age from 1 to 98 years. Among persons with available information, 24 percent reported being hospitalized. Nine deaths were reported.

Salmonella bacteria live in the intestinal tracts of many animals, and the bacteria is often found in these animals' feces. Salmonella is transmitted to humans who unknowingly consume food contaminated with the feces. Typical food contamination occurs when rats, mice, birds, or other animals infiltrate food production plants (like PCA's Georgia and Texas plants) and leave their droppings on raw or finished product which eventually finds its way to consumers' tables.

Persons who consume the bacteria typically experience severe vomiting, diarrhea, fever, and abdomen pain. They usually recover in about a week. Children and the elderly are the most susceptible to a more severe infection, which can lead to dehydration, renal failure, extended hospitalizations, Reiter's Syndrome, and even death.

In the current outbreak, the lawyers at Simon & Luke have seen an unusually high number of hospitalizations and severe cases even among normally healthy adults. This shows that the Salmonella Typhimurium strains found in the contaminated peanut butter are particularly potent - as further evidenced by the nine deaths attributed to the outbreak.

Austin and Keebler Peanut Butter Crackers is Primary Outbreak Vehicle
PCA distributed the contaminated peanut butter products in two ways: through the sale of raw peanut paste to hundreds of companies like Kellogg Company, and through peanut butter sold under the King Nut peanut butter label.

While PCA's contaminated peanut butter and peanut paste were distributed to numerous companies for use as ingredients in over 3100 products, peanut butter crackers were determined to be the primary food vehicle for this outbreak.

PCA's raw peanut butter was sold under the King Nut brand label (owned by Kanan Enterprises, Inc.) to nursing homes, cafeterias, schools, and colleges where those most susceptible to salmonella poisoning — children and the elderly — were likely to have consumed the contaminated product. Health officials detected numerous "clusters" of individuals that contracted salmonella poisoning at nursing homes across the United States. Those nursing homes served King Nut peanut butter to their residents.

Posted by
TRESIA BANDY KLEINEICK BARNETT
on January 5, 2014
I became ill for a week, hospitalized, missed work, have never had full use of my right side since. I was interviewed by health dept after I got home, said hospital called them reporting a salmonella poisoning. They asked about alot of things, the meal that seemed to be the issue was beef, graving, green beans and home made peanut butter cake from an area restaurant. Later when I saw the peanut butter outbreak I called the health dept., they said they had and would report all salmonella poisoning cases that appeared to have been exposed to peanut butter and I would be contacted. Over the years I have contacted many individuals and now it says any settlements are over. Well....when did I even get an opportunity to apply...????