If there ever was a more important role for lawyers and litigation professionals, it is in family law. Corporate law, environmental law, even real estate law has nuthin' on the complexities and the drama that explodes from divorce petitions, custody battles—even who gets to keep the family dog.

And you know those ads you see, that advertise divorces for a couple of hundred bucks? Don't go there. You get what you pay for—and unless you're willing to serve up your life and your future on a silver platter, you'll need some qualified legal representation to make sure your interests are protected. 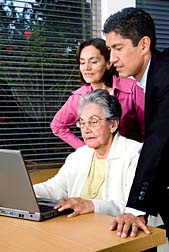 Let's face it, relationships don't seem to last like they once did. Many factors are behind this. The 'me generation' that got its feet wet in the liberated 1960s, then passed on their views and values to their kids, don't tend to stick it out like previous generations. 'Till death do us part' borders on a fairytale now. People just aren't so willing to stick with a relationship that is loveless, lacks fun or substance, or just doesn't work for a variety of other reasons.

What's more, dual-income households where both husband and wife have full-time careers mean that it's easier to split. Translated, there's more money in the pot, and the woman (who usually is awarded primary custody of the kids) will still enjoy child support from her spouse, but with her own career does not have to rely solely on the support payments to live. She has her own life, her own friends and her own income. In many cases, she makes more than he does. Why not bale, if the relationship just isn't working?

Another factor: the baby boomers have advanced to middle age, and have arrived at mid-life with all the crises that go along with it. Suddenly the fact that you've been married 25 years to the same person, perhaps working at the same job and living in the same house doesn't seem to do it for you any longer. You've arrived at that point in your life where you need to take a leap of faith and fulfill some dreams—even if it means trading in your life in the process.

Regardless of the motivation, the process is complex and fraught with risk for both sides.

And the stories are legion. Take the fellow who writes on lawyersandsettlemets.com about the end of his relationship with his former wife. He claims she did not work but led a life of leisure, taking the opportunity to see other men and women on the side. When her husband confronted her, she allegedly fled to her wealthy father to arrange for a divorce.

And despite the fact her family has money, she allegedly won the house that her spouse brought into the relationship, his car, and even his pet dog that predated his ex by five years. He also lost his job, yet is required to pay support payments to his former spouse, in spite of the obvious wealth of her family.

The upshot is that she now lives in her father's mansion, while her ex has been forced to live with his cousin and his family while he tries to cobble another life together for himself.

The bottom line is the fairness that so often escapes a family law case that is mishandled, at least by one of the sides, due to a lack of proper representation. Of course you want to be fair, and you like to think that the fairness factor will guide the process. But that is not always the case, especially when there is anger involved.

More FAMILY LAW News
Experts suggest that if your relationship looks as though it is coming apart and you're considering divorce, the best couple of hundred bucks you'll ever spend is by sitting down with a reputable family law firm for a consultation. In an hour, their family attorneys can give you a pretty good idea of what you might be in for, what the dynamic, the payout and the cost, the likely custody arrangement, and in a nutshell what kind of life you're going to have at the end of it all. It may not be pretty, and after hearing the hard facts you might think twice about dissolving your relationship, and try to patch it up instead.

However if you feel you have to proceed, or you have an inkling that your spouse is—and it isn't possible to work it out amicably, then for heaven's sake get yourself a lawyer, and get a good one.

You owe it to your kids, yourself and your future.

If you have suffered losses in this case, please send your complaint to a lawyer who will review your possible [Family Law Lawsuit] at no cost or obligation.
Request Legal Help Now

Click to learn more about LawyersandSettlements.com
LawyersandSettlements.com - A trusted, independent legal news provider bringing quality news and information on all legal cases and lawsuits filed in United States of America to its readers since 2002. Over 250,000 legal help requests including Family Law Cases have been forwarded to lawyers all across to the country.