The Natural Resource Defense Council has published its annual list of the best--and worst--public beaches in the US, with findings that shoreline pollution has gotten worse. This pollution can make swimmers sick and lead to long-term problems for local residents and ecosystems.

Pollution on the Rise 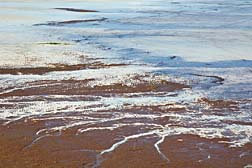 With an increase in stormwater runoff, NRDC expects the trend to continue.

"It's obviously most prevalent in over-developed areas. Many developers turn a blind eye to it if they're not required to take proactive measures. And the government is not doing enough to protect the public, so it's getting worse."

"Beach Bums"
The NRDC has identified 92 high-risk beaches in 19 states that violated public health standards at least 25 percent of the time, according to monitoring data.

Some of the many high-risk beaches (whom the NRDC dubs "beach bums") include Jackson Park Beach in Chicago, Venice Beach in California and several beaches in the Chesapeake Bay, where pollution-related closing and advisories have been increasing steadily over the past three years.

A lawsuit filed against the EPA by the NRDC last summer is part of a host of lawsuits by concerned community members and advocacy organizations.

"You find these beaches everywhere; it's not just an urban problem," notes James. "Citizens really have to take action and take to the courts."

Current Standards "Obsolete"
The NRDC report states that "Current EPA-recommended beachwater quality standards are 20 years old and rely on obsolete monitoring methods and out-of-date science that leave beachgoers vulnerable to a range of waterborne illnesses." As a result of its findings, the NRDC has taken legal action.

The question is: Why does it so often take a lawsuit to get a public beach to clean up its act?

Pollution Causing Sickness
"The best way to keep swimmers from getting sick is to keep pollution out of the water," states the NRDC.

Unfortunately this message hasn't gotten through, and pollution at many public beaches has lead to sickness in children and adults, as well as a host of problems for local ecosystems.

"In some cases, [governments] haven't been keeping up to date on the environment. In other cases, they're in the back pocket of the developers." James notes. "Either way, it shakes public confidence in our beaches, and our politicians."