Alabama Power Seen as the Worst Polluter of Hazardous Substances

When it comes to toxic hazardous substances, you want to see them contained. You don't want them all around you, and the Hazardous Substances Act requires that such hazardous substances be kept away from humans. However if you live in West Jefferson County in Alabama, you live within close proximity to the worst polluter in America. 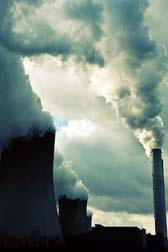 However, the Miller plant remains the Big Daddy. And that's a huge concern for anyone living near the facility, given what is known about mercury and what it can do. Mercury is a hazardous substance that gets into the air. Okay, so you have bad air. Try not to breathe. Well, that's not realistic. Nor would people tolerate wearing, or being seen to wear gas masks to the grocery store.

But even if you did, it wouldn't help. That's because mercury, a toxic metal, can settle from the air into the soil and waterways. Once there, it migrates through that soil and water right into our food chain. Now, we don't just breathe the stuff. We eat, and drink it too.

To what effect? The thought of consuming mercury in fish taken from mercury-infested waters, or the bread baked with wheat harvested from mercury-laden soil is hardly appetizing and can't be good for you.

But it's worse for the children, and is particularly dangerous to fetuses, infants and children. Exposure to enough mercury, and children can suffer permanent neurological damage and developmental delays.

Alabama Power acknowledged the rise in emissions, but defended the emissions by indicating it produced more power in 2007. More power, it seems, equals increased emissions into the atmosphere. The company also said those emissions should start declining with the installation of new scrubbers that are expected to reduce levels of harmful pollution and hazardous substances spewed into the air.

This latest requirement of the Hazardous Substances Act will cost about a billion bucks, and indeed should help. But that's in the future. It does nothing to help things out now. And while coal-fired plants are blamed for about 40 percent of all mercury emissions, an equally alarming statistic is the fact that at Alabama Power's Miller plant alone, mercury emissions grew more than 13.5 percent from 2006 to 2007.

While Alabama Power has the top-ranked, and eighth-rank polluters identified above, they don't stop there. Coal-fired plants in Walker County and Mobile (Gorgas, and Barry respectively) combine with Miller and Gaston to help establish Alabama as one of the worst States for mercury air pollution in the US.

The levels were revealed in a report released in mid-November by the Environmental Integrity Project, in Washington.

More HAZARDOUS SUBSTANCES News
There is little doubt that residents of Alabama who live within close proximity to any of the coal-fired plants mentioned, are well aware of the dangers relative to the environment in which they live. The air smells bad. Maybe the water tastes a bit funny. The impact on property values and the lack of tourism aside, it can't be a particularly nice place to live.

And, it appears not a particularly safe one either. The good news is that with new scrubbers on the way, things will get better eventually. However if the report by the Environmental Integrity Project is any indication, things will get much worse, before they get better. And assuming the time it takes for air, soil and water to right itself, it could take generations to reverse the toxicity that is spewing into the Alabama air.

The Hazardous Substances Act is there for a reason, and a good lawyer can tell you all about it.

If you have suffered losses in this case, please send your complaint to a lawyer who will review your possible [Hazardous Substances Lawsuit] at no cost or obligation.
Request Legal Help Now