Environmental law will hopefully serve a handful of residents whose wells and drinking water were allegedly contaminated by natural gas, affecting not only their health but also the value of their properties. 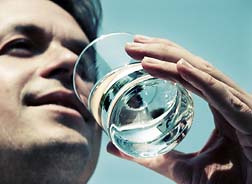 Pat Farnelli is one of 13 area residents of Dimock, Pennsylvania, a rural community 15 miles south of the New York border. According to a November 21 report by the Associated Press, Farnelli and her neighbors signed a lease with Houston-based Cabot Oil & Gas Corp. to facilitate the exploration of a potentially lucrative formation or natural gas beneath their land.

Now their wells have allegedly been polluted.

Residents assembled at a November 20 news conference to describe the problems that surfaced shortly after Cabot began drilling near their homes. The water flowing out of their faucets was suddenly cloudy and discolored, and it tasted and smelled foul.

Farnelli claims that the water made her vomit and made her children ill.

On New Year's Day, a neighboring resident's well actually exploded. A subsequent investigation by the state determined that combustible gas from the drilling conducted by Cabot had been allowed to escape and migrate into the region's groundwater.

More than a dozen affected residents are suing Cabot. They seek an environmental cleanup, medical monitoring and damages in excess of $75,000 each. The lawsuit was filed late in the day November 19 in federal court at Scranton.

More ENVIRONMENT News
A Cabot spokesperson told AP that the lawsuit was without merit. However the state Department of Environmental Protection has already concluded that 13 wells were polluted and a consent decree was signed with Cabot in early November that saw the company agree to pay a fine totaling $120,000. The company is also required to take steps to improve its drilling operations and to restore or replace the compromised water supplies.

Craig Sautner, 56, signed a lease with Cabot shortly after buying his house in the spring of 2008 for $150,000. He said his well has since been contaminated by methane gas and unknown pollutants that discolored his water and made it smell like a "fishy pond."

"You're paying a mortgage on a house that's completely worthless," said Sautner, a father of two. "I work every day, busting my hump just to pay the mortgage and I can't even sell my house."

Cabot has not admitted to any wrongdoing and says the methane contamination could be happening naturally.