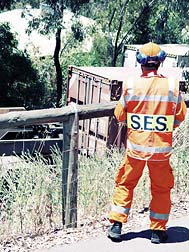 Such is the concern after a recent freight train derailment and explosion in northern Illinois that resulted in the spilling, it is alleged, of up to 75,000 gallons of ethanol into the ground and a nearby creek in Rockford. The disaster, which occurred June 19th, resulted in the death of one person.

Of equal concern over the death and the ultimate cause of the derailment, is the aftermath of the suspected leakage of ethanol into the ground. According to a June 27th accounting of the situation in the Associated Press (AP) the Environmental Protection Agency (EPA) for the state of Illinois has asked the state Attorney General's office to require the rail company in question to undertake a cleanup of the spill.

The train involved is reported to have been a CNR freight train owned and operated by the Canadian National Railroad (CNR). The EPA, according to the AP report, is asking CNR to undertake soil and water testing and clean up any contamination that is found. The Associated Press reports that it also wishes for CNR to supply residents in the area of the derailment and alleged chemical spill with safe drinking water if wells are found to be polluted.

It appears, however, that the state EPA request is not a hard sell. According to Tom Hook, identified in the AP report as the lead investigator of the crash, CNR had already dug one, to two feet into the ground at the crash site and had already removed 755 tons of contaminated soil.

A spokesperson for CNR said that the railway was working with federal and state environmental officials. Patrick Waldron indicated that the Canadian rail company had voluntarily begun to conduct "extensive testing and remediation measures."

Regardless of the level of co-operation coming from the Canadian owner of the railroad, environmental officials suspect that the spill may have killed fish in nearby rivers. So far, according to the AP report, tests of surface water show no signs of ethanol contamination. However, officials were quick to point out that the EPA could not begin its investigation until after the fire from the explosion had been extinguished, and a spokesperson for the federal EPA confirmed that samples for testing were drawn on June 21st, just two days after the derailment.

More ENVIRONMENT LAW News
Federal EPA spokesperson Mick Hans told the Associated Press that because the samples were drawn so close to the crash date, environmental officials could not rule out ethanol as the cause of recent fish kill.

It is unclear why the EPA for the state of Illinois had approached the office of the Attorney General in an effort to force the hand of a company that appears to be doing its due diligence with regard to the alleged contamination.

That said, environmental issues are such that few are comfortable to wait for the other shoe to drop before taking action in accordance with environment law. Presented with even the possibility of contamination leading to reduced fish stocks and tainted drinking water, environmental law is brought to bear quickly at a time when the environment is Job One for both society and industry.

If you have suffered losses in this case, please send your complaint to a lawyer who will review your possible [Environment Law Lawsuit] at no cost or obligation.
Request Legal Help Now