Environmental Alert: The Drugs in Your Water Supply

If the old adage, 'you are what you eat' is true, then it would also hold that you are what you drink—something that could be morphing into the latest environmental issue. The suggestion is that we all might turn into pharmaceutical addicts just by drinking the tap water.

Yes, that's an exaggeration—but what isn't are the traces of pharmaceuticals that have been found in the water supplies of many a city. In fact, the Associated Press (AP) reports that at least 46 million Americans could be exposed to trace amounts of pharmaceutical affluent in their tap water. That's an increase of five million; above the 41 million that AP first identified as being at risk within the context of an investigation into the presence of pharmaceuticals in the nation's water supplies, and articulated this past March. 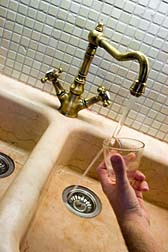 Is this a crisis? Hardly. In Fargo, for example—one of the cities which tested its supply—the levels of three drugs found in its municipal water supply were so incredibly minute that Fargo's water director sent the results to the local health officer in an attempt to determine the most appropriate way to interpret the results for the community at large.

We're talking parts per trillion, so no need to go running for the hills.

The fact remains, however, that the presence of drugs in the nation's water supply is an emerging environmental issue that bears some scrutiny.

Basically, the pharmaceutical affluent stems from a nation of citizens increasingly dependent on pharmaceuticals to maintain health, ward off disease or just get through the day. In a nutshell, it's coming from us—our human excretion. Many of the chemicals under the microscope somehow slip through sewage and drinking water treatment plants.

The result is that when you turn on your tap in Chicago, for example, you could be getting trace amounts of a cholesterol medication, and a nicotine derivative. Other cities that tested their supplies found the anti-convulsant carbamazepine. Officials in Colorado Springs found five pharmaceuticals in all, including a tranquilizer and a hormone.

"This is obviously an emerging issue and after the AP stories came out we felt it was the responsible thing for us to do, as a utility, to find out where we stand," said Colorado Springs spokesman Steve Berry in comments to Associated Press. "We believe that at these levels, based on current science, that the water is completely safe for our customers.

"We don't want to create unnecessary alarm, but at the same time we have a responsibility as a municipal utility to communicate with our customers and let them know."

It has been reported that the overwhelming majority of cities have yet to test their municipal water supplies for the presence of pharmaceuticals. However, of the 27 cities that did, positive results were recorded in 17, including Reno, Nev., Savannah, Ga., Colorado Springs, Colo., and Huntsville, Ala. Results are pending in three others.

Eight cities found no traces at all, including Boston, Phoenix and Seattle. A lot has to do with the source of drinking water, and in Seattle's case their water is sourced from a "pristine source," according to a spokesperson for the Seattle Public Utility.

More ENVIRONMENT News
However, for cities and municipalities that treat sewage, the presence of pharmaceuticals could merit further analysis of just what the water is being treated for—and then it becomes a Catch 22. Increasing the treatment punch to eradicate potential pharmaceuticals, means increasing the chemical content of drinking water, which just may drive more people to embrace the use of bottled water for drinking, cooking and personal hygiene.

But could the damage have already been done? Comprehensive risks are still unclear, but researchers are uncovering evidence that even extremely diluted concentrations of pharmaceutical residues can harm fish, frogs and various other aquatic species.

Worse, it's also been shown to impair the workings of human cells in the lab.

And that's not the half of it: according to a related AP report, US hospitals and long-term care facilities flush millions of pounds of unused pharmaceuticals down the drain every year, providing much fodder for those conversant with environmental law.

If you have suffered losses in this case, please send your complaint to a lawyer who will review your possible [Environmental Lawsuit] at no cost or obligation.
Request Legal Help Now