The concept of environmental protection is integral to all who share the environment together with the various building blocks of our environmental landscape—air, water and soil. So it may come as a surprise that a public agency cognizant of environment law would allow the discharging of untreated sewage into a public body of water. 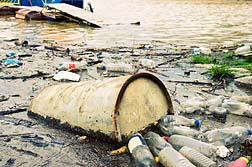 That's what has happened in Scranton, Pennsylvania after the Scranton Sewer Authority is alleged to have discharged more than a billion gallons of untreated sewage into the Lackawanna River last year alone. The irony is that the agency with whom the Authority has been negotiating to resolve its water problems—the Environmental Protection Agency (EPA)—is now suing the Authority and seeks a court order to force the Authority to stem the discharges and comply with the federal Clean Water Act.

Today's edition of the Times-Tribune in Scranton reports on a lawsuit filed yesterday by the EPA over the illegal discharge of untreated sewage into the river. The complaint also asks for penalties for eight separate claims that bring fines of up to $32,500 per day for violations between 2004 and 2009, and $37,500 per day from January onward.

According to the report, the Authority has been struggling with an aging system and has been in negotiations with the EPA for a period of years in an attempt to address the problems and cobble together a long-term plan to arrive at a solution. To that end about $3 million has been spent by the Authority and the Feds on a solution that had its beginnings in 2002, when the EPA first issued a compliance order to the Authority.

More ENVIRONMENT News
Even after years of negotiations a plan has yet to be approved by the EPA, which has now hit the Authority with a lawsuit. Authority Executive Director Eugene Barrett called the lawsuit unfair and said it ignores "substantial progress" made to upgrade the aging system, which serves Scranton and Dunmore.

However, "taking this action is now necessary," said EPA spokesman David Sternberg.
As many as 40 failures to meet minimum control standards were identified in an EPA inspection report issued in early September. Of note was the alleged allowance of sewage overflows into the river in dry weather. Such overflows, on a limited basis are allowed only in rainy weather.

Barrett points to the final phase of a $25 million modernization of its facilities. He also suggested the EPA was aware that construction might interfere with wastewater treatment. Barrett also said the long-term plan remains unfinished because the EPA changed its requirements in the middle of the process and now wants revisions that will cost $750,000.