A recent study has found a link between certain acid reflux drugs and an increased risk of pneumonia, according to an article in The New York Times. Although you may not think this affects you, some reports estimate that between 40 and 70 percent of hospitalized patients receive some form of medication to prevent acid reflux. Researchers said the increased use of the medications was one reason they wanted to study acid reflux drug side effects. 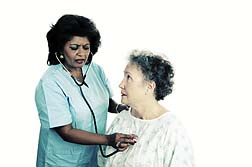 The study was published in May in The Journal of the American Medical Association and included the records of adult admissions to Beth Israel Deaconess Medical Center between January 1, 2004 and December 31, 2007. The patients included were hospitalized for at least 3 days and were not in intensive care. The study found that 4.9 percent of patients who received the acid reflux drugs developed pneumonia while in the hospital. That is in comparison to 2 percent of patients who were not given the drugs.

The authors of the study made adjustments to allow that patients who were given the drugs may have already been more ill than others to begin with, thereby increasing their risk of pneumonia. Even with that adjustment, researchers found that patients given acid reflux medications had a 30 percent higher risk of pneumonia than patients who were not given the drugs.

The acid reflux drugs, known as proton pump inhibitors, include Nexium, Prilosec and Prevacid, are given to patients to prevent stress ulcers. They are often given to intensive care patients, but are more and more frequently given to other hospital patients.

This risk was not identified in patients who were given acid reflux medications known as histamine-2 receptor agnostics (which includes Pepcid and Zantac).

More ACID REFLUX DRUGS News
Proton pump inhibitors decrease acid in the stomach, but may actually increase the growth of bacteria in the upper gastrointestinal tract and in the respiratory tract, possibly leading to pneumonia.

This is not the first study to find a link between proton pump inhibitors and pneumonia. A 2004 study, also published in the Journal, found the risk of pneumonia almost doubled in patients taking the medications compared with patients who were treated with other medications. According to the Los Angeles Times, the findings indicated that approximately 1 patient in 226 treated with proton pump inhibitors developed pneumonia, compared with 1 patient in 506 treated with other drugs.

"Current use of gastric acid-suppressive therapy was associated with an increased risk of community-acquired pneumonia," researchers concluded.

If you have suffered losses in this case, please send your complaint to a lawyer who will review your possible [Acid Reflux Drugs Lawsuit] at no cost or obligation.
Request Legal Help Now