Pop Goes the Commercial Contract: Jackson and Prince Are Served 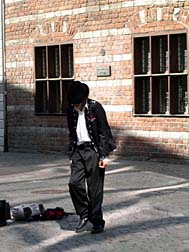 "For pop singer Prince, the latter is hardly the case. He, together with his music publisher are embroiled in a breach-of-contract lawsuit with the Revelations Perfume company out of New York, which is suing the dimmutive icon for not holding up his end of a bargain to help the company market their "3121" fragrance.

"3121" is also the title of a Prince album, for which Revelations Inc. dotted all the right eyes and cross all the necessary tees. The company licensed Prince's name, likeness and the album "3121" for use in its "3121" fragrance. Revelations has made the point that it spent $2.5 million on fees, promotion and ramping up the marketing machine—and also agreed to pay Universal half of net profits from sales of the fragrance.

The sticking point is that, according to Revelations Inc., Prince and Universal have allegedly failed to participate in various promotions since the "3121" fragrance was launched in July of last year.

Prince has not been reached for comment, while a spokesperson for Universal holds that the claims by Revelations Inc. are completely without merit.

That one will most likely be settled when the contents of the signed contract are compared with the various itineraries of the singer against the various promotional events, which Prince may, or may not have agreed to appear.

Meanwhile, a commercial contract dispute involving pop icon Michael Jackson may come down to a case of "he said, he said…"

At the center of the case is the princely sum of $7 million which Michael was advanced by Sheikh Abdullah bin Hamad Al-Khalifa, the son of a wealthy Arab monarch, for joint recording projects, as well as interests in Jackson's ownership stake in the Sony/ATV publishing catalogue and Jackson's Neverland Ranch.

Jackson claims the $7 million was a gift. We should all be so lucky to be given a gift of $7 million dollars.

The commercial contract dispute, and the allegation of breach, centers around legal problems the Jackson clan was having in 2003, not the least of which was a charge of child molestation filed against Jackson's brother, Jermaine. It has been reported that the Jackson 'clan' moved out to Bahrain, and millions were paid by Jackson's wealthy hosts in legal fees and costs, as well as in support of the Jackson entourage.

And yes, there were gifts, as well—various pieces of jewelry and watches that Al-Khalifa admits were actual gifts. However, the budding musician was also intent on enlisting the help of Michael Jackson to re-establish his music career. Thus, helping out the Jackson family in the midst of its crisis, paying some bills and the giving of gifts would certainly be interpreted as good will in exchange for some future payback.

However, some will argue, there is a limit to anybody's generosity, no matter how much wealth is in play. And according to Al-Khalifa, the $7 million paid to Michael Jackson was not a gift at all, but an advance for future expenses required of their partnership—and an advance to also offset Jackson's growing financial problems. It has been reported that in 2003 Jackson was in danger of losing his ranch, and his music-publishing catalogue.

Now that Al-Khalifa is ready to collect on that debt, Jackson is balking. The pop star claims that the amount was something less than $7 million, and that it was merely a gift.

More COMMERCIAL CONTRACTS News
It has also been reported that Jackson is feeling 'undue pressure' to sign a contract he doesn't consider binding, which appears to suggest the money was advanced under a verbal commitment, not a written one.

If you have suffered losses in this case, please send your complaint to a lawyer who will review your possible [Commercial contracts Lawsuit] at no cost or obligation.
Request Legal Help Now

Posted by
Sample contracts
on March 23, 2011
Jackie REST IN PEACE... WE MISS YOU