A Tale of Two Contracts

Sometimes those breaches can make for salacious headlines, especially when well-known celebrities are involved. 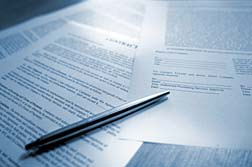 Take the case of Charlize Theron. The well-known screen actor was allegedly under exclusive contract with Swiss watchmaker Raymond Weil to wear Raymond Weil timepieces during public events. As is so often the case with entertainment celebrities and sports heroes, endorsement contracts are a daily occurrence—either a verbal endorsement, or an implied endorsement by wearing, or using the product in question.

According to reports Theron signed a 14-month contract with Raymond Weil in 2005 that required her to wear Raymond Weil products at public events, especially with paparazzi in attendance. However, an appearance at a film festival in Austin Texas in 2006 instantly put that contract into breach when Theron was photographed wearing a Christian Dior watch.

The actor, according to reports, initially fought the claim of beach of contract, stating that the error was just that—an oversight. However it was subsequently reported that a New York judge, just last week, ruled that Theron was guilty of repeatedly ignoring the terms of her contract with Raymond Weil. Several instances of breach were cited, including the existence of a separate contract with Christian Dior.

Judge Colleen McMahon told the courts: "By wearing a Christian Dior watch at the film festival, Theron breached her covenant not to 'wear publicly any watches other than Raymond Weil.'

"Theron recognizes as much, calling her decision to wear the watch 'regrettable'. It was more than 'regrettable,' it was a clear breach of the agreement."

Both parties will be before the courts next month in an attempt to reach a pre-trial settlement. If those efforts prove unsuccessful, the case could go before a jury in 2009.

Meanwhile, in a tale of another contract, Citigroup has announced that it is pursuing legal action after its bid for Wachovia failed. The former was approached by Wachovia to gauge its interest in taking over the troubled Wachovia Bank, together with financial aid from the federal government. The US Fed had been campaigning for a bank to partner with in the takeover, and Citigroup came to play. It says it bargained in good faith and had an agreement in place.

However, in the end Wells Fargo wound up being the successful suitor, by forgoing any financial aid from the US government and going it alone by accomplishing the takeover through the issuance of stock. It has been reported that Citigroup cried foul and attempted to block the acquisition of Wachovia by Wells Fargo, but in the end backed off on its opposition.

Instead, Citigroup is proceeding with a $60 billion claim for punitive damages, bad faith breach of contract, and tortuous interference. It should be noted that it is customary for a litigant to go in with a figure many times higher than the expected payday. However, the point has been made that considering the current state of the economy, a $60 billion ask will score few public relations points for Citigroup.

More COMMERCIAL CONTRACTS News
In the meantime, commercial contracts are established for a reason—and anyone, or any entity signing a commercial contract should have every reason to believe that such an agreement will be honored on both sides. However, it is a sad reality that many companies habitually breach contracts simply because they expect the other contractual party will lack the resources to fight it. It may be morally reprehensible but hey—business is business, right?

Wrong. Commercial contract law is on your side to protect you. You went into the commercial contract in good faith. You paid your money and lived up to your end of the bargain. However, it you're the only one toeing the contractual line you are being had—and you, and everybody that comes after you will let these goons get away with their bully tactics, unless you fight back in the courts of law.

After all, you're only fighting for that to which are you legally entitled. What's wrong with that?

If you have suffered losses in this case, please send your complaint to a lawyer who will review your possible [commercial contracts Lawsuit] at no cost or obligation.
Request Legal Help Now