Husband Became Aggressive on Chantix, Wife Feared For Her Life

A smoking cessation drug that has been linked to suicide and various other adverse reactions continues to bedevil the industry. For some, Chantix has worked and worked well. However for others, Chantix side effects have infected their lives in ways they could never imagine. Chantix warnings include cautions for suicide and suicidal thought, aggression and various other concerns. 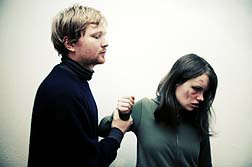 Mary is a Chantix client who started on the Chantix regimen March 11th and successfully quit smoking. And then…

"On May 25th, I had what I can only call a psychotic break—my thoughts were paranoid and illogical, Mary writes. "My husband researched the side effects of Chantix and suggested I stop taking the medication.

"I stopped taking the medication on May 26th and have been depressed ever since. I've been taking an anti-depressant for about a month and a half and this will hopefully get me over this 'hump,'" Mary wrote on August 17th. "I hope these feelings are temporary and I'll be feeling my normal, happy self soon."

Given that she hasn't managed to find any information as to the duration for psychological effects after stopping Chantix, Mary remains concerned while "happy to still be smoke-free, and staying vigilant so I stay that way. However, I would NOT have taken this drug had I known what toll it would take on my feelings of well being."

Marianne wrote on August 10th that she started taking Chantix in January and initially found it helpful. "However, I had a seizure while driving my car and I was severely injured and in the hospital for quite a while. Thankfully no one else was hurt."

And then there is Yvette, who weighed in at the end of July having had experience with one of the Chantix side effects: aggression.

More CHANTIX News
"My husband took the Chantix for 4 1/2 months, and I was fearing for my life at this point. I called the doctor and told him that he needed to be taken off of this medication as he was very aggressive, depression, angry all the time. I read the small print on the (medication guide) and it stated that if you have had depression in the past, you should not take this medication. Five years ago my husband (rated) #10 on (a depression) scale of 1-10. Why did his doctor give (Chantix) to him? My daughter and I suffered greatly. Now that he is off the medication he is getting back to normal."

Since concerns with regard to Chantix have been mounting, the US Food and Drug Administration (FDA) has been cautioning doctors and health care professionals to carefully screen patients before prescribing Chantix and to carefully monitor their progress.

Despite concerns with regard to Chantix, the effects of smoking continues to kill thousands of Americans each year. In the FDA's view, the benefits of Chantix continue to outweigh the risks.