LAWSUITS NEWS & LEGAL INFORMATION
Home Page >> Feature Articles >> Which is the Killer: The Cigarette or th..

Which is the Killer: The Cigarette or the Drug?

It was just as recent as 2006 when drug makers were confident that drugs could do things such as cure depression, make people stop smoking, and even lose weight. But recently their hopes have been shattered because these drugs that are meant to block pleasure centers in the brain seem to have blocked pleasure in other ways as well. 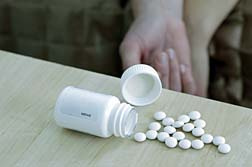 Margaret Bastian of Rochester, New York was one of many patients complaining of problems with the drug Chantix. The drug is used to help people quit smoking. However, it has now been linked to a large number of patients exhibiting suicidal behavior and dozens of these patients actually committing suicide.

Bastian says that she began feeling severely depressed and felt she was going down into a hole that she could not crawl out of. Falling down into this hole resulted in her taking too many sleeping pills and other medications, so her doctor took her off of Chantix.

The drug was manufactured to block the pleasure centers in the brain that make people want to smoke. However, it seems that researchers are finding that drugs that are manufactured to block pleasure centers end up blocking other life pleasures as well. This takes the fun out of many things and not just the influence the drug is supposed to have on making a person stop smoking.

Researchers believe that it is possible to improve the drugs that are causing suicidal behaviors. They are optimistic about Chantix because of the fact it targets a pathway that is different than some of the obesity drugs on the market. Chantix targets the nicotine switches in the brain. Many doctors are showing optimism that the drug will be manageable.

But doctors are no longer leaning on the fact that these pills are the way to go when it comes to curing addiction. Enthusiasm is diminished because of the side effects

It was in 2004 when the main ingredient in Chantix, rimonabant, showed that people could lose weight and keep it off longer. It also showed that it aided in smoking cessation. This discovery was exciting because both smoking and obesity are two huge problems that plague people and it could tackle two problems at the same time.

But in an April 2008 study, 43% of the people who took drugs with rimonabant in them experienced psychiatric issues. Only 28% of those who took placebos experienced any of the same issues. The study also included those who have experienced depression in the past. This resulted in doctors being told not to give the drugs containing rimonabant to patients with a history of depression.

More News
In February 2008, the FDA said it was increasingly likely that there is a link between Chantix and psychiatric problems. This resulted in Pfizer adding warnings to their drug labels, despite the fact the risk had not yet been proven. The labels stated that the risks were likely.

However, it has been argued that the nicotine withdrawal and the cessation of smoking can cause depression and mood swings in itself. Some doctors have agreed that smokers are at a higher suicide risk than non-smokers.

Jeanne Morrison of Louisville, Kentucky said she lasted only 10 days on Chantix because she had become so depressed that she could not stand it. She was even having nightmares. Then again, her psychiatrist said that a schizophrenic patient took Chantix with no problem. This isn't to say that the risk does not exist for those who take the medication.

If you have believe you have suffered side effects from taking Avandia, please contact a lawyer involved in a possible [Chantix Lawsuit] to review your case at no cost or obligation.
Request Legal Help Now