SUVs and other vehicles in which drivers ordinarily feel safe and secure can become a source for danger and personal injury when a traffic mishap combines with physics which govern a tall, top-heavy vehicle, resulting in a rollover.

And far removed from the glamorous images of NASCAR, or Hollywood film where a vehicle rolls spectacularly and the driver walks away unscathed, a rollover is something you do NOT want to endure. And yet, if you drive an SUV or light truck, you are 127 per cent more likely to suffer a rollover accident, than if you were piloting a passenger car. 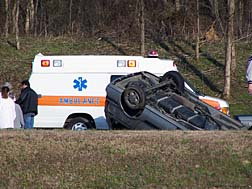 Here's the irony. Consumers gravitate to an SUV or a light truck for the increased sense of safety they feel on the road. The vehicle is bigger, with more sheet metal and crumple zones between them and the guard rail, or another car. And true, in a tussle between a large SUV and a small compact car, the SUV is going to come out on top and score the decision.

But that's assuming the SUV stays upright on all four wheels. And the very thing that affords you that sense of safety and stability - sitting up high - can turn around to bite you when the dynamic forces of a collision, or collision avoidance, results in pressures that can cause instability. A tall, top-heavy vehicle that is prone to instability is more likely to roll over than a passenger car, which sits lower to the ground.

According to figures released from the [National Highway Traffic Safety Administration,] there have been on average 227,000 rollover crashes per year in the light truck category from 1992 through 1996. Rollover fatalities averaged 9,063 per year, or 29 per cent of all light truck fatalities. That figure is closer to 10,000 today. Additionally there were an average of 200,000 non-fatal injuries per year associated with rollovers in light trucks.

The SUV is classed together with light-duty pickup trucks and passenger vans.

It's not hard to imagine why the SUV class has such a high rate of overturns, 2 to 3 times the rollover rate of a passenger car. Just climb behind the wheel of a modern SUV and you immediately feel invincible. Surrounded by luxury at every turn, you feel more like you're in a cockpit, rather than a vehicle that will soon be navigating the road. Sitting high and looking down at smaller cars below, affords you a sense of power. Why, I could practically drive right over that little Toyota Yaris down there, you might think.

And on the open road, with a dead-quiet interior and your favorite CD blaring out of the sound system, you would be forgiven for feeling absolutely safe, secure and invincible, knowing that in this vehicle, there is nothing you can't handle.

Think again. Because when drivers start thinking they're invincible, when drivers start likening the driving experience to a video game, that's when drivers get careless. Suddenly the right wheel dips off the road onto the soft shoulder, and you must oversteer to correct the problem.

Bingo. You've just introduced forces onto your tall, top-heavy SUV that is a recipe for a rollover. When this happens, all kinds of forces come into play. Will your seatbelt hold you in place? What of your head and neck, and those of your passengers? Will the roof be strong enough to not only bear the extreme weight of a heavy SUV, but also the dynamic forces of a rollover event that pushes the roofline hard into the asphalt, another vehicle, or a stationary object like a guardrail?

One needs only to digest the Federal Motor Vehicle Safety Standard (FMVSS) 216, to gauge the answer to this question.

More News
Under current regulations the roof support or pillar on a passenger car can deform, or collapse to a limit of five inches when it is subjected to a force of one, and one-half times the vehicle's own weight or 5000 lbs, whichever is less.

However, Under FMVSS 216, SUVs & pickup trucks (light trucks) are not required to meet those minimums. As a result, the roof pillars of a 6,000 lb. pickup truck or SUV are required only to withstand five-sixths, or about eighty per cent of the vehicles own weight, in order to qualify under FMVSS-216.

The implications for drivers and their passengers are substantial. Considering the higher risk for rollover inherent with the SUV and light truck, together with strength issues related to roof structure, it's little wonder that the SUV carries such a Catch 22...

You feel so much safer driving one. And yet, with a higher propensity for rollover, your risk of injury is even greater.