More CALIFORNIA CAR ACCIDENTS News
Officer Jarrod Martinez of the California Highway Patrol was the victim of a tragic collision this week, making him one of the latest officers whose lives have been claimed by California auto accidents. 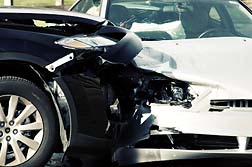 Martinez, a 33-year old husband and father, was riding his motorcycle home from a court appearance when a sports car swerved sharply into the officer's lane resulting in a collision as reported by the Daily Nexus. Though officer Martinez was taking proper safety precautions, including wearing a helmet and proper riding attire, his body was dragged for 45 feet before the speeding car could come to a halt.

"(We)'re all taking it very serious," fellow CHP officer Michael Duenas tells the press. "It has hit home very hard for all of them. Any instance where you know somebody and the next you know you find out they were killed, it's difficult to take."
The Nexus reports that alcohol was not involved in the collision.

In 2008, the CHP observed an 8 percent increase in car accidents in California, with the amount of incidents involving drivers that were driving under the influence also showing a rise to 11.2 percent of the total accidents investigated according to a report from MerlinMonroe.com.