Health Canada has added its voice to the growing number of medical bodies warning of the potential danger that contrast agents in MRI scans pose to people with kidney disease. Health Canada, the Canadian government agency that regulates medicine, issued a warning to physicians on March 9, 2007. This was followed up by a press release four days later addressed to consumers.

"Health Canada is advising consumers of a notice sent to Canadian hospitals advising relevant health care professionals of safety concerns related to contrast agents containing gadolinium," stated the press release. "These contrast agents have been linked to a rare and potentially fatal skin disease that sometimes affects other organs." 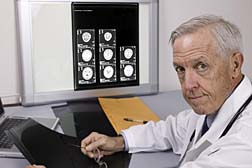 A contrast agent is "a liquid that is injected into the body to make certain tissues more visible during imaging procedures" such as magnetic resonance imaging (MRI) scans, explained Health Canada.

"NSF/NFD may develop over a period of a few days to several weeks," explained Health Canada. "The most visible effect is lesions on the skin. Affected skin becomes thickened with a woody texture, restricting joint movements and resulting in the shortening or distortion of muscle tissue. Internal organs such as the heart may also be affected."

In worst-case scenarios, NSF/NFD can cripple or even kill its victims. There is no known cure.

For unclear reasons, NSF/NFD strikes people with severe kidney disease. More specifically, NSF/NFD affects kidney patients who have been injected with a gadolinium-based contrast agent (GBCA) as part of an MRI scan.

The FDA has approved five GBCAs for use in the United States. These include Magnevist (made by Bayer Schering Pharma of Berlin, Germany), Omniscan (made by GE Healthcare of the UK), OptiMARK (made by Mallinckrodt of Hazelwood, Mo.), and ProHance and MultiHance (made by Bracco Diagnostics of Princeton, NJ).

In its letter to doctors, Health Canada stated that 109 cases of NSF/NFD had been noted worldwide, in association with gadolinium agents.

"The majority of cases have been reported following an exposure to Omniscan (96 cases)," said Health Canada. "Eleven reported cases were from patients possibly exposed to Magnevist and two cases following exposure to OptiMARK."

More News
Two months after Health Canada issued their warning letters, the U.S. Food and Drug Administration requested that a "black box" warning be included on packaging for gadolinium drugs. This warning urged people with kidney problems to avoid the use of such contrast agents.

"Whether the GBCAs are the only agents or conditions that may be associated with NSF/NFD in patients with renal disease is unknown," reads a "Questions and Answers" statement from the FDA. "At this time, only certain patients who receive GBCAs appear to be at an increased risk for developing ... NSF/NFD."

Both the FDA and Health Canada offered the same parting advice: if you've got kidney disease, talk to your physician before undergoing an MRI scan. If you've already gone that route and developed NSF/NFD, it's time to talk to a lawyer.
READ ABOUT THIS LAWSUIT

Posted by
Karo Papazian
on February 12, 2019
I was injected Gadolinium 18cc on the 16th of January 2019.
On the 17th I was in terrible pain of all my joints as well as the top of my skull. My eyes were burning and dry.
Went to emergency to see a doctor, I was told to take Tylenol!
The pains in my joints are persistent and Tylenol has not helped me. Are there any cures to my pains?
What should I do?
BTW when I asked IF any side effects will result from Gadolinium, the technologist answered ZERO!
I trusted her and got injected whilst I was sitting on the MRI3Tesla machine bench.