A man who claims to have suffered from MRI contrast side effects and MRI health risks has launched a lawsuit against the hospital that administered a series of MRI procedures that eventually left him with early-stage Nephrogenic Systemic Fibrosis (NSF). 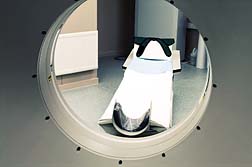 According to the November 16 issue of Missouri Lawyers Media, Silver had a series of MRIs and other procedures performed at St. Luke's Hospital in Chesterfield, Missouri between 2005—the point at which he started regular dialysis—and 2007.

For each procedure Silver alleges he was injected with contrast agents to facilitate and enhance the image for the attending doctors and technicians. It was during this time that the plaintiff began to develop hardened, textured skin with black and brown patches, similar to an orange peel or tree bark. Silver's joints have since become inflexible, and he experiences burning, itching, severe pain, and difficulty walking.

He has been diagnosed with early-stage NSF. There is no known cure.

Gadolinium-based MRI contrast agents are routinely used for MRI and similar diagnostic procedures. Gadolinium, which is toxic, is normally expelled in an efficient manner by the kidney and thus is not considered a risk to healthy individuals. However, patients with renal disease or other issues involving their kidneys do not have the capacity to expel the gadolinium in such an efficient manner, setting the stage for the onset of NSF.

It is now recommended that kidney patients not be administered gadolinium-based contrasting agents, or be put on dialysis immediately following the procedure.

Silver asserts that the hospital was negligent in its decision to administer gadolinium-based contrast agents in his particular case, given that the US Food and Drug Administration (FDA) issued an alert regarding the link between gadolinium-based dyes and NSF in June 2006. The hospital is alleged to have continued injecting him with contrasting agents through 2007, after the FDA alert was released.

Silver is seeking both actual and punitive damages from St. Luke's Health Corp. and the unnamed manufacturers of the gadolinium-based contrast agents. The plaintiff's legal counsel notes there were four different times the hospital could have injected the plaintiff with dyes. The hospital, according to Silver's lawyer, has so far refused to turn over its records.

Posted by
ccynthia miller
on January 1, 2015
I have nsf and I cant find anyone to represent me. I have medical records proving so.