The story of the 12-year-old South Carolina boy who shot and killed his grandparents in November, 2001, then set their house on fire, all after taking the anti-depressant Zoloft, continues to unfold in court and in the media.

Pittman shot his grandparents, Joe and Joy Pittman, with whom he was living, with a pump-action shotgun as they slept. He then set fire to their Chester County home. He was immediately taken into custody, and has remained in custody ever since. He was described then as being 5 feet 2 inches tall, and weighing less than 100 pounds. The killings occurred just days after he began taking the adult dosage of Zoloft prescribed by his doctor. Family and friends described the acts as completely out of character for the boy. 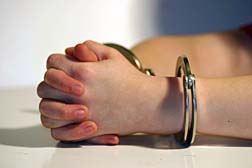 Within days of the killings, the 12-year-old, alone with the state employee supervising his care, made a full confession to her at her request. The prosecutors in the case used this confession in the same way they would have treated a confession from an adult.

Three years after the killings, Pittman was tried in adult court and convicted of murder. He was sentenced to 30 years in prison. He was then 15 years of age.

Pittman's attorneys have throughout said he should have been found not guilty on the grounds that he was involuntarily intoxicated by the antidepressant Zoloft at the time of the shooting, and didn't know right from wrong. They also said the confession was influenced by Zoloft and by Pittman's youth. They appealed the conviction.

Pittman's attorneys have said they plan to "take all remaining steps available to continue Christopher's appeal".

More News
Paul Waldner, one of Pittman's attorneys, said: "Obviously the decision is a setback for us, but our resolve to continue to try to obtain justice for this boy who committed the only violent act of his life, only days after he was given a mind-altering drug, is strong.

The case generated outrage that Pittman was held so long before his trial in Charleston County.

Zoloft is the most widely prescribed antidepressant in the United States, with 32.7 million prescriptions written in 2003. In 2004, the FDA ordered Zoloft and other antidepressants to carry Black Box warnings (the highest level of warning) about an increased risk of suicidal behavior in children.

Pittman, now 18, and measuring 6 feet 2 inches tall, has attracted attention worldwide. He has finished his high school in prison, and is visited by his family and dozens of supporters regularly.
READ ABOUT THIS LAWSUIT

If you or a loved one has suffered from the side effects of Zoloft, please contact a lawyer involved in the [Zoloft Lawsuit] who will review your case at no cost or obligation.
Request Legal Help Now