Zimmer Hip Replacement: "Too Young to Feel So Old"

Patients who have had Zimmer Durom hip implants can be forgiven if they believe their pain is related to their hip replacement surgery. After all, it is a major surgery and one that has an extended recovery time. Unfortunately, not everyone is fully recovering from their surgery, possibly due to problems with the Zimmer Durom cup. 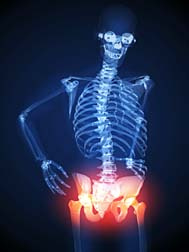 In 2006, Mona W. fell from her front porch and fractured her hip. She had hip replacement surgery shortly after and says her hospital stay was "unremarkable." However, after she was released from the hospital, she had a number of problems, including an infection and pain in her hip.

"A few weeks after my surgery, I woke up to the most horrible odor," Mona says. "I had some swelling before that, but the doctor thought it was just swelling from the surgery, so he left it. But that morning I woke up to a god-awful smell.

"I was sent to the hospital and they reopened the hip to look for an infection. I had a MRSA [Methicillin-resistant Staphylococcus aureus] infection. They didn't redo the surgery, but they did implant a MediPort [an implantable port used when an IV is needed intermittently over a long period of time].

"The infection eventually went away and they took the MediPort out, but I've noticed in the last year that I have pain and discomfort in the hip that was replaced [the left hip]. When I sit for more than 30 minutes, I have a really hard time getting up. I limp around because I cannot walk properly. Even following the infection, I didn't have this trouble. I actually felt great after I recovered from the infection.

More ZIMMER DURON CUP News
"Now, it feels really tight in my hip. It feels like my leg weighs about a million tons. The hip even swells sometimes—it actually pokes out. When I get out of my Jeep, my hip hurts. If I sit too much, my hip hurts. When I first get up in the morning, I limp. In fact, for the last six months, any time I get up, I limp. I don't walk straight like I used to. I am too young to feel so old.

"I honestly thought it was just a normal part of recovering from hip replacement surgery until I heard about people's problems with the [Zimmer] hips.

"Sometimes, you assume that the pain you feel is normal and that's how it's supposed to be. I think I should have asked more questions about what was going on with me. They never told me how I got the infection and now I don't know why I'm having these hip problems. People assume their doctor knows everything, but he doesn't. Don't be afraid to ask questions."

If you have been harmed by the use of a Zimmer Durom hip implant, you may be eligible to join a lawsuit against the maker of the implant. Contact a lawyer to discuss your options.