If you are worried about your Zimmer Hip replacement, you are not alone. Many patients who have had the Zimmer Hip prosthesis implanted are concerned that at any time, their hip will give out on them, leaving them unable to move. Their concern is with the Zimmer Durom Cup, a prosthesis that was meant to provide the patients with greater freedom and mobility, but has allegedly incapacitated some patients and caused them more pain than they ever thought they would endure. 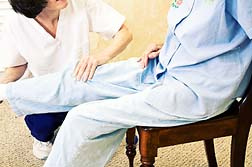 Joyce M. says that she is awaiting her third hip replacement. Both of her previous implants were manufactured by Zimmer. Joyce says she has not been able to walk since 2001 and has had physical therapy for 6 years. She says she has been depressed since her ordeal began.

"My husband had to take an early retirement due to the fact I could not be left alone," Joyce says. "It has ruined both of our lives…. There is not an amount I can ask for that will cover the damage I have endured."

Joyce is one of the patients who may have had their hip prosthesis fail on them, but there are many out there whose hips are fine…for now. They carry on with their normal activities, but in the back of their mind they wonder when theirs will fail, and if that failure will cause them serious harm. Living with that kind of worry is stressful. These patients never know if they will suddenly move the wrong way, causing the hip to give out. They do not know if they should play with their grandchildren or go for a walk because that might be the end of their hip and the beginning of a lot of pain.

Meanwhile, the patients whose hips have given out are stuck in a catch-22: their hip needs to be replaced, again, but they are nervous about undergoing another operation. After all, hip replacement is a tough surgery and there is no guarantee that the surgery will fix everything. Just ask Joyce, who is awaiting her third hip replacement. There is simply no guarantee that the surgery will fix the problem. Do they go through an additional surgery, with all the risks inherent in that, or do they try to survive as long as possible with the hip they have?

More ZIMMER HIP News
For these patients, there is no easy answer. No matter what action they take, there is the potential for a lifetime of pain and immobility.

The pain, the stress, the lack of mobility, the huge impact on quality life—these are all reasons why patients are now filing lawsuits against Zimmer. The lawsuits allege that the Zimmer hip prosthesis was defective, which caused it to fail and led to excruciating pain for the patients. Of course, the lawsuit will not take away the pain and suffering these people have gone through. Like Joyce said, there is no amount of money that can make up for this, but the lawsuit may cause medical device companies to think twice before putting defective products on the market. At the very least, it will compensate people for the extra medical bills they face when they have their hip implant replaced.