ATVs such as the Yamaha Rhino are supposed to be associated with fun. They are meant to be a great way to spend some time outdoors, riding through nature and enjoying life. Even when they are used with work, as a way to move around a large yard more easily, they are still meant to make a person's life easier.

So why are so many people complaining that they've been badly injured by their Yamaha Rhinos?

The injuries that we hear about at LawyersandSettlements are not minor injuries. They are traumatic injuries that put people at risk of having their limbs amputated. Many people, adults and children alike, have wound up in hospital requiring major surgeries to repair the damage done by a Yamaha Rhino rollover. 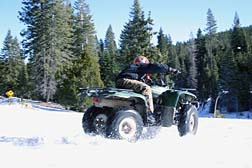 Most of the children involved in a Yamaha Rhino accident are traumatized by it. Their parents report that the children have difficulty sitting in cars—that they are nervous when they feel their parents are driving too fast or when they go around a corner. Some are left with permanent scars—physical and psychological—from the accidents. One parent reported that his daughter cannot fully use her right arm after the Yamaha Rhino she was in rolled over. She also required seven surgeries to recover from her injuries.

Adults are also deeply affected by their experiences. Dave wrote in to LawyersandSettlements to say that his leg was crushed from the knee down and he almost lost his foot after an accident in his Rhino. Like many other adults involved in Rhino incidents, Dave missed a lot of work while he recovered. In addition to lost wages, many people have hospital and other medical bills to pay because of their injuries.

More News
The sad thing is that even with their serious injuries and repeated surgeries, the people who survive their Yamaha Rhino rollovers are actually the fortunate ones. Some people, including children, have died in Yamaha Rhino accidents.

In every case we hear about, the victim was in a Yamaha Rhino that was not moving at a fast speed. Yet somehow, either while attempting to turn or while driving down a slight incline, the Yamaha Rhino has rolled over. Many people do not yet have doors on their Rhino ATVs and so the victim sticks his or her arm or leg out instinctively to break the fall. This is when the damage occurs as the limb gets stuck either directly beneath the ATV or pinned beneath the rollbar.

Although Yamaha is now issuing safety alerts and doors for the Rhino, these moves come too late for those who have been seriously injured, or who have had a loved one die, in a Yamaha Rhino rollover.