Lawsuits are still being filed alleging the Yamaha Rhino ATV is defectively designed, rolls over too easily and lacks proper safety equipment. Plaintiffs say they have suffered permanent injuries and faced numerous surgeries as a result of their accidents. As more people realize that their Yamaha Rhino rollover may not have been their fault, more lawsuits will likely be filed.

One lawsuit was filed in Ohio Circuit Court, alleging that a distributor of the Yamaha Rhino ATV was negligent in failing to install a retrofit kit that would have protected the hands of ATV riders. The lawsuit seeks compensatory and punitive damages. 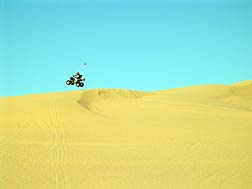 According to the lawsuit, the plaintiff was a passenger on the Yamaha Rhino when it rolled over. The plaintiff's hand allegedly became trapped underneath the ATV, resulting in multiple fractures to her hand and fingers. As a result of the injury, the plaintiff required surgery, metal pins and other hardware to fix her fractures. Furthermore, the plaintiff alleges she has limited ability to use her hand.

Other problems with her hand involve stiffness, sensitivity and permanent disfiguration.

Of course, this plaintiff is not the first to suffer injuries from the Yamaha Rhino ATV. Numerous Yamaha Rhino owners and riders have written to LawyersandSettlements.com regarding their own experiences. Many say they suffered injuries to their hands and feet, requiring multiple surgeries and months of rehabilitation to use the affected limbs properly.

One man from Ohio says his leg was crushed from the knee down and he almost lost his foot after trying to maneuver his Yamaha Rhino. He wound up being off work for six months following his accident.

Sadly, it is not only adults who are affected by Yamaha Rhino rollovers. ATVs are popular with youth as well, and some of those who were injured, and even killed, in ATV accidents were children. Parents write to LawyersandSettlements.com about the pain their children have endured, including crushed hands and feet, broken tibias and fibulas, emergency surgeries and skin grafts.

There is also the emotional toll of Yamaha Rhino rollovers. Many of the children involved in these accidents have anxiety when subsequently riding in any vehicle, including automobiles.

More News
It may be tempting to assume that those people driving the Yamaha Rhino are responsible for the accident by driving too fast or performing unsafe maneuvers. However, the Yamaha Rhino has been shown to have a high center of gravity, making it prone to rolling over even when operated under safe conditions. Furthermore, many of the injuries caused in such accidents could have been prevented if the Rhino ATV had proper safety features, including doors, to protect riders.

Unfortunately, when the Yamaha Rhino was initially released on the market, it was sold without doors, despite its tendency to rollover. This has resulted in many serious and life-threatening injuries to Yamaha Rhino riders. If you or someone you love was seriously injured in a Yamaha Rhino rollover accident, contact a lawyer to discuss your legal options.