The controversial Yamaha Rhino ATV is being recalled by Yamaha amidst fears of brake failures of the vehicles. The recall involves nearly 7800 Side-by-Side Rhino ATVs. This is the most recent safety issue of many that has plagued the Yamaha Rhino ATV. Many experts and consumer groups believe it to be the most dangerous ATV on the market presently.

There's a possibility that the caliper for the brake on the left-hand front wheel has a manufacturer defect. The defect has caused brake fluid to leak from the vehicle. This defect has been determined to have the potential to cause loss of control of the vehicle with the inability to brake. 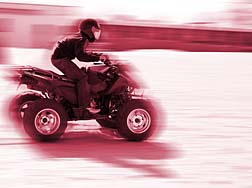 The vehicles affected by the recall are the 2008 Rhino YXR 450 and YXR700 Side-by-Side sold by Yamaha dealers. They were sold throughout the nation from October 2007 to March 2008. The retail price of the vehicles was $8,300 to $1,200. The CPSC has said that owners who have registered their Yamaha ATV's falling under the recall were notified by a letter in the mail. All other consumers are warned to discontinue using the ATV's now, and to contact their nearest Yamaha dealer about the recall.

Luckily, no injuries or fatalities have been reported at this time due to the effects of the recall. The rollovers of the Yamaha Rhino ATV's have a greater propensity for causing injuries and deaths during rollover accidents. The construction the Rhino is such that it is heavy at the top portion and has too narrow of tires. It is more prone to rollover during a turn than other ATV's even if the driver is going at a slow pace on an even surface.

Common injuries that result from the Yamaha Rhino rollovers are broken and/or legs, ankles, and feet. Some victims have had to undergo amputations due to the damage inflicted by the accident. Also, many children have lost their lives during a rollover accident.

More News
Concerned groups argue that Yamaha has moved at a snail's pace in acknowledging the safety issues surrounding the Yamaha Rhino. This has been the first incident that Yamaha has made a concerted effort to recall the vehicles. The company did send letters out in September, 2006 to warn owners of the possibility of the vehicles easily tipping when executing a turn. It was felt by many that the letter put more of the blame onto the consumers for unsafe driving practices than onto the construction of the vehicle itself.

During 2007 Yamaha began to take more steps to acknowledge the safety issues and hazards surrounding the Yamaha Rhino ATV. The company began to give owners of both new and used Yamaha Rhinos the option of safety updates to the ATV's. The safety updates involved adding hand grips and doors to the ATV's. No reports have been made as to the effectiveness in safety of the vehicle enhancements.