When Mike purchased his Yamaha Rhino in September 2007, he had no idea that within four months, the vehicle would be sitting idle in his mother's garage after a rollover accident left him with a seriously damaged leg.

Mike bought the Rhino for work. As a superintendent on a 55-acre worksite, he is responsible for traversing the entire site, making sure projects are being completed on time and in a safe manner. The project he is currently working on is a large casino-hotel property. 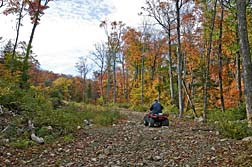 "I bought the Rhino as I wanted my own scooter because the job is 55 acres and we have 400 people and I always wanted one ready to go," he said. There were other ATVs on the site, but by bringing his own, it would always be available to transport him throughout the site. "I had ten labourers and carpenters at the hotel. It was easier for me to get back and forth."

He had been using the Yamaha Rhino without incident until December 10, 2007. It was a cool, dry day, not raining or anything. Workers were at the hotel site pouring concrete and Mike had gone to the office to get some drawings.

"I had the wheels cut short," he said, meaning the wheels were cranked all the way to one side. "The scooter was on. I gave it gas but it didn't move. I did it again. It jumped into gear." But because the wheels were turned in, the Rhino had nowhere to go, so it rolled over, right onto Mike's leg.

"It flipped on its side, the driver's side," he said. "My natural reaction was to put my foot out to catch myself. It rolled over onto my leg." With his leg trapped, he had to call another superintendent over to help lift the Yamaha Rhino off his leg. He looked down and saw only a small tear in his pant leg. Then someone said for him to lift his pant leg and check for damage.

"It landed on my leg about three inches below my knee. It was cut about ten-to-twelve inches down to my ankle. You could see right in to the bone. I had no feeling in my foot."

"I was scared. My boot was full of blood. They took me to a hospital in Mobile, Alabama. The doctor put two or three fingers into the cut to clean it out in the hospital," he said.

The doctor then sent him home but two days later he ended up back in the hospital, this time for ten days. His leg had swollen up huge, he said, and he had a blood clot behind his knee cap. He was on pain killers and had to be put on blood thinners, which he is still on to this day.

He missed about two-and-a-half months from work. For the first month he couldn't put any weight on his leg. Then, he started to walk with the aid of crutches. When he finally returned to work, they put him on office duty for a while. Today, he is back in the field working, but the Rhino accident has left him with some limitations.

"It's still numb in my foot, like when your hand goes to sleep? That's how my ankle and foot feels. I have a lot of pain at night. I walk all day. I live 45 minutes from work. By the time I get home at night, my leg is stiff and it's hard to move it. It still bothers me quite a bit."

He had been going to physical therapy and his doctor will assess whether more therapy is required later this month. He doesn't know when he will be weaned off of the blood thinners.

"I can't run now. I used to run but cant as my foot doesn't bend like my other foot," he said. "I have limitations on the job. I have problems going up the ladders. I have problems walking across rebar. I have to look at everything on the job site."

More News
He said he was surprised at how quickly the accident happened especially since the Rhino wasn't even moving, and said he thinks the Rhino is way too top heavy to be safe.

He was aware that the Rhino could be dangerous as he had a friend, a New Orleans police officer, who had a Rhino rollover his leg causing an amputation just below the knee.

"I wouldn't recommend anyone get one, not after what happened to me," he said.

It seems ironic that a superintendent working on a job site that is totally concerned with safety is injured while trying to better access his workers. The Yamaha Rhino has flipped over on too many people's legs and arms to be a safe way to travel. It's almost like an accident waiting to happen.